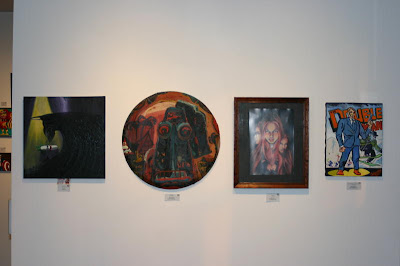 Photos by John Warner
Simultaneously, as San Diego Comic-Con 2010 was turing out to be one of the best I ever attended, I had some artwork (two acrylics and one round oil canvas) in a show curated by ex-San Diego local MATT LORENTZ (he of the Tony Hawk and Quicksilver skatewear designs).
Matt got a great bunch of artists - probably about 50 of us - to contribute to the first annual AFTER CON, a charity event in memory of Comic-Con founder Shel Dorf held in a nondescript white building just north of the corner of 10th and Market in downtown San Diego.
I could have gone to this art show every night, as they had receptions from Thurs. through Sat. during Comic-con, but unfortunately with all of the stuff going on, I only made it on Thursday night, but that proved fortuitous, as I ran into my pal Pinguino there. It was a full house.
It was a fun night. My buddy and Comic-Con host Alex Vallejo stopped by at the end of his night partying and we chilled out at the art show, goofing around. 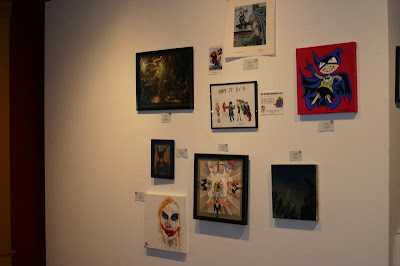 See that Bat-Mite in the upper right? That's a contribution by my buddy, EL MUERTO AZTEC ZOMBIE cartoonist JAVIER HERNANDEZ. 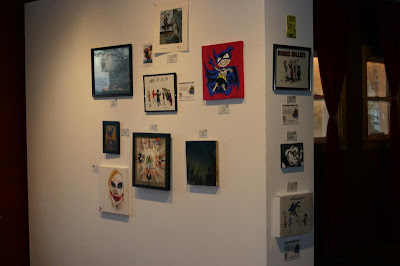 Here's another shot of that Bat-Mite, with my EL GATO'S MUDDA peeping out of the side column (li'l b/w painting of the old bag with the glasses). The Bat-Mite painting sold, by the way. 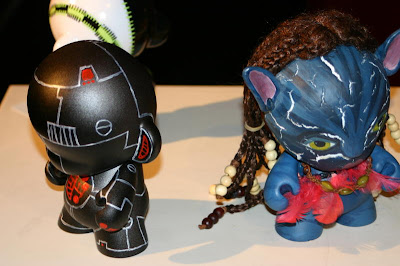 Not only were paintings featured, so were these cool scupltures. Anyone speak Na'vi? 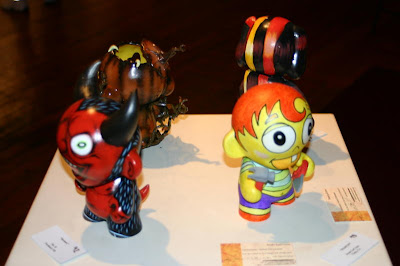 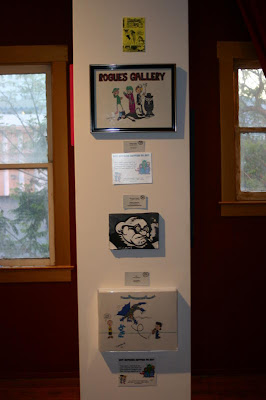 That's a head-on shot of my EL GATO'S MUDDA painting above. Anyone who's read my EL GATO CRIME MANGLER comics knows that she smokes and cusses, folks! 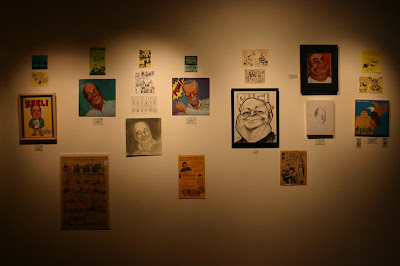 A tribute to late Comic-Con founder Shel Dorf and Stan Lee above... 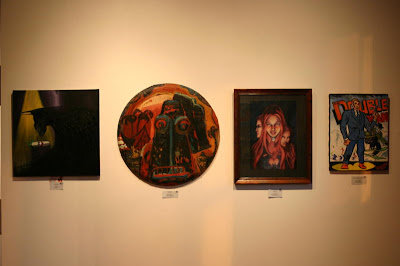 My two other paintings in the show are the second ("Tiki Holiday," which sold) and the fourth ("The Double Man- The Animated Series").
Thanks, Matt, for putting together such a fun show. It was a lot of fun and Matt did a great job. Count me in for the second annual AFTER CON!

The cute little colorful character sculpture to the right of the devil is mine! His name is Marvin and he had a wonderful time at AfterCon. Dean.