GREEN LANTERN and X-MEN movies teach me a lesson... 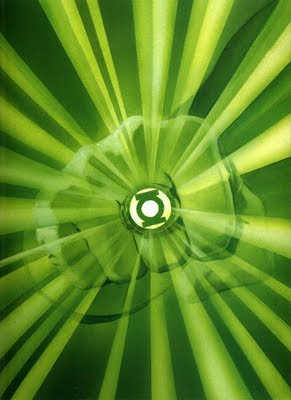 I caught the GREEN LANTERN movie yesterday, and I found it a very mixed bag.
On the up side, Ryan Reynolds was terrific as the Hal Jordan/GL character, and the suit/mask didn't bother me as much as it did some people. I also enjoyed the parts on Oa, Sinestro, Kiliwog and all the cosmic stuff.
On the down side, the actress who played Carol Ferris was pretty awful, and all the stuff with her character, her father the senator (Tim Robbins) and the Hector Hammond stuff was very cornball, B-movie stuff. A helicopter scene and a balcony scene were almost parodies of similar moments in the original SUPERMAN, as were a few notes on the soundtrack, and the derivative SUPERMAN stuff bothered more more than anything about this movie. Also, the single worse scene for me was where Carol Ferris saves Hal by whipping out a laptop and firing some missiles from a jet - that was the single most ridiculous thing I've seen in a long time.
All that said, I enjoyed GREEN LANTERN enough to want to see a sequel and the return of Sinestro (now evil!), as I think the potential is there to keep this going into a franchise. Of course, if the box office take continues to dip, that sequel will never happen, but I hope it does well enough to invite a sequel, as I think this franchise could get better, as did X-MEN (the first X-MEN in 2000, after all, was only good in the movie's first half before going to crap).
Oh, the lesson I've learned this summer: don't judge a movie by its trailer: I thought the GREEN LANTERN trailer was by far the best of the superhero lot. I hated the THOR trailer, I dislike the CAPTAIN AMERICA trailer and I was completely indifferent to X-MEN: FIRST CLASS.
Well, as it turns out, I thought X-MEN: FIRST CLASS was not only the best X-Men movie but one of the all-time best Marvel movies, all of my friends who have seen THOR have loved it, and GREEN LANTERN, for all of my anticipation of a rip-roaring movie, did not live up to its potential. Shows you what the hell I know. Guess I should go against my instincts and see THOR and CAPTAIN AMERICA and see if these two are any good.
Posted by Greenblatt the Great! at 11:27 AM

the problem is that all your friends who have recommended THOR had no expectations, whereas, after all their recommendations, now you will. I am convinced that more than ever the secret to movie fulfillment in the 21st century is lowered expectations

You are so right. And nothing beats great word of mouth. I take that more seriously than movie reviews.

It's funny how misleading trailers can be. People always complain that the best parts wind up in the trailer and the movie itself is terrible. With X-MEN and THOR, it seems like this is happening in reverse. Both trailers were pretty underwhelming to me. Same with CAP. But I gotta go see these flicks and judge for myself.

Same with RISE OF THE APES, which may turn out to be the best American motion picture since THE GODFATHER!

Trailers and first instincts are not to be trusted!

The reclusive, cave-dwelling Jerry Boyd, my BACK ISSUE MAGAZINE buddy, emerges from the ether to weigh in. In the process, Jerry scores points with the ladies. Read on....

Good thought, good thoughts.
The costume didn't need the CGI swirling green lines or the cloudy-with-a-chance-of-meatballs deelio underneath the lantern chest emblem. That annoyed me....there was nada wrong with just having the black, green, and white (I missed the white gloves!) suit.
Overall, I enjoyed it! All three superdoer movies this summer have been very nice, and THOR was the best as of this writing. Hopefully, CAPT. AMERICA won't spoil this roll.
Carol Ferris sending off the computerized missiles into Parallax didn't bother me. It worked for INDEPENDENCE DAY (lol) and it made sense since she's a test pilot anyway and knows that stuff. Also, I get tired to seeing the ladies do little more than be romantic and scream for help when the baddies show up (see SPIDER-MAN 1 - 3).
Good for her!
The romance worked, the story was good, with enough drama to keep it all grounded in reality (despite the Guardians, OA, and the Corp.) and Reynolds was a good choice for the hero.
It would be nice, however, to see the hero BUILD UP to saving the world....not doing it his first time out or first released movie. No one's that good their first week on the job......
Laaaaaaaaaaaaaaaaaaaaaater,
- Jerry