BACK ISSUE! MAGAZINE # 36 has hit the shops. It's the MONSTERS issue. This is not the cover of the issue, but it is a cover by the same artist, the great Earl Norem, who painted so many memorable Marvel magazine covers such as this one: 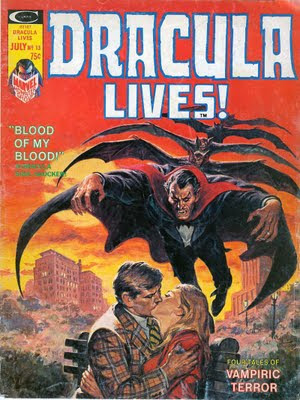 I contributed three articles to this action-packed issue: STRANGE TALES FEATURING THE GOLEM, DR. THIRTEEN from the PHANTOM STRANGER series (my favorite DC book), and a very special photo essay dubbed DINNER WITH THE DeZUNIGAS, chronicling the night of April 21, 2008, when me and my good buddy and favorite humor cartoonist, JOSE CABRERA, hit Tony and Tina DeZuniga's house on the east side of town for a home-cooked meal. If you don't know who Tony DeZuniga is, I have no time to explain the amazing resume of this great '70s DC/Marvel artist, but let's just say that you'll be hearing a lot about the guy (and seeing a lot of his work) as we near the release of a movie based on his co-creation, JONAH HEX, which will star no less than Josh Brolin and Megan Fox.

Outside of my contributions, my buddy JERRY BOYD has contributed his article on the creation of VAMPIRELLA.

The 1970s was a golden age for horror comics and this issue captures all of that flavor and more. As the editor of the mag likes to say: "Don't ask, just BI it!"
Posted by Greenblatt the Great! at 9:02 AM