Looks like bad timing for Disney to acquire Marvel. The Kirby Estate is about to wage war against Marvel for the rights to Kirby's creations and co-creations. This was posted online:

The heirs of Jack Kirby have announced their intentions to reclaim Kirby’s share of the copyrights to the Marvel Comics characters that he co-created, including such multimedia juggernauts as the Hulk, the Fantastic Four, Thor and the X-Men:

The legal notices expressed an intent to regain copyrights to some creations as early as 2014, according to a statement from Toberoff & Associates, a Los Angeles firm that helped win a court ruling last year returning a share of the copyright in Superman to heirs of the character’s co-creator, Jerome Siegel. 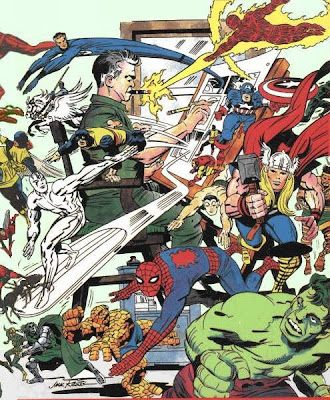 Lo and behold, it appears from the Kirby illustration below that the Kirby heirs will have an army of friends on their side.