My Wild Weekend in Whittier....

I don't want to get all uppity on you but I was in Uptown Whittier on Saturday night (September 5th, my sister Melody's birthday!) helping RAFAEL NAVARRO celebrate the release of his latest comic, SONAMBULO LIVES!, at GEEKS comic book shop. What a blast! 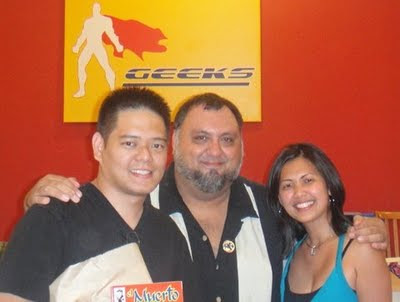 Thanks for my buddy, JAVIER HERNANDEZ (pictured here in the middle), who had just conducted his DIY Comics panel earlier that day, I met this happenin' couple, Arvie and Adonna of AGIMAT COMICS. They are in the midst of pioneering comics for the iPhone (and iPhone-ish) applications. You'll be hearing a lot about these two movers-and-shakers soon, but in the meantime, go back to strumming your fake guitar to Beatles Rock Band or....much better yet....check out Arvie's daily web comic strip, SHADOW CANDY.
Posted by Greenblatt the Great! at 7:10 AM

No need for face paint, you wore that red cowboy hat well. You're like Tyler Perry: You can do bad all by yourself!