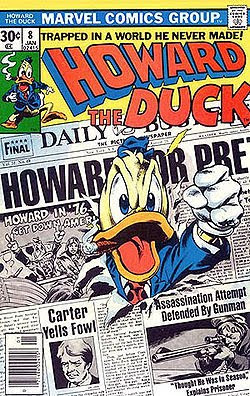 Well, with Disney buying out Marvel and boasting about acquiring its catalogue of 5,000 characters (of which the top half dozen have already been tied up at other studios?), it will be a trick trying to figure out which of the other 4,994 can carry a big Hollywood tentpole. Hmm, let me put my thinking cap on.....

1. a HOWARD THE DUCK movie that would make Steve Gerber proud. With CG where it is today, and the groundwork for live action/CG paved by cinematic triumph ALVIN AND THE CHIPMUNKS, they wouldn't need Lucas or a cheap duck suit either. Disney can easily nail this one, after all they have all of the smarts and talent...over at Pixar.

2. MOON KNIGHT. Aaaah, Moon Knight. The coolest, most badass Batman knockoff ever! (sorry, Daredevil...). Moon Knight is like the Boba Fett of '70s Marvel, that was the secret series that everyone collected every issue of. Yes, I would like a Moon Knight movie, please. And not a campy one, dead serious like THE DARK KNIGHT RETURNS. Even Frenchie sounds too jokey, rename him "The Frenchman."

3. THE INCREDIBLE HULK 2. I really, really dug THE INCREDIBLE HULK, in some ways it was more consistent in quality than the IRON MAN movie. Ed Norton was intense. And I want to see that dude become The Leader in the sequel! Don't blue...I mean, GREENball us, Hulk-makers! Push this sequel through!

4. SPIDER-WOMAN. Done right, this movie can realistically capture the macabre grit of her battles with that prattling jokester, Brother Grimm!

5.The THOR reboot. Yes, I know the first THOR movie has not even been completed yet but I have a feeling that the filmmakers are already screwing this one up. They should already simultaneously start filming the reboot. Call it THE MIGHTY THOR.

6. I'm sure half of the 5,000 characters are those CONTEST OF CHAMPIONS creations. You know, great, memorable characters who have really stuck around. Like South America's Defensor, Israel's Sabra, and France's The Peregrine. That's three badass movies right there!

8.Um, running out of characters, lessee, a DAZZLER movie? OH! OH! I know! THE HUMAN FLY! ROM: SPACEKNIGHT! MICRONAUTS! (Aw, snap! Those were all licensed characters.....guess not....)

If all else fails, how about ANOTHER Punisher movie? And quick! The holidays are almost upon us!
Posted by Greenblatt the Great! at 6:47 AM

Just think... I could've been in "Howard The Duck"!