EVERYONE'S A CRITIC: HARRY POTTER AND THE HALF-BLOOD PRINCE (2009) 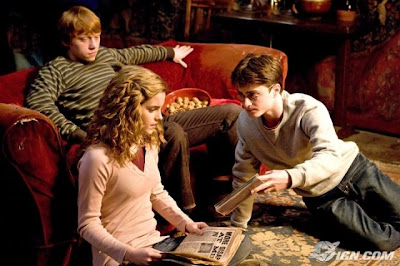 I really admire J.K. Rowling. Any author who can get kids to read in this day and age---and at 800 pages at a clip---that's nothing to sneeze at. It's hard enough to get people to read a 22 page comic book. Rowling has achieved something very few authors in the 21st century can lay claim to: a literary phenomenon.
That said, I am one of the world's worst Harry Potter fans. I've only read the first book, and a couple chapters before the end, I got bored and gave up on it. Not because it was badly written or lacked imagination, it just didn't hook me in deep enough, and I felt I had better things to do (and better books to read...). Then I watched 5 minutes of the first Potter movie on TV and gave up on that whole series. In the post-SPIDER-MAN/IRON MAN/TRANSFORMERS world of movies, it takes more than a couple of 9-year-olds flying around on broomsticks to capture my imagination. I'm also tired of British fantasia: epic movie series which are transparently coded commentaries on British society, filled with cherub-faced boys and old bearded Shakespearean hacks. I didn't grow up in England so what do I know from boarding schools! I guess I'm not much of an Anglophile. So needless to say, I've never seen one Potter movie from beginning to end (not even movie # 3, which most critics deem the best of the series).
Until now. This weekend, my girlfriend (who is a big fan of the books and movies) and I went to see HARRY POTTER AND THE HALF-BLOOD PRINCE, the biggest movie on Earth (this week...). Again, I am not the ideal audience for this movie. So what did I think of it? Meh.
First off, it's at least a half hour too long. There's no reason why any movie---even this minor-league LORD OF THE RINGS---needs to be 2 and a half hours, just like TRANSFORMERS 2 didn't need to be 2 and a half hours (although I haven't seen that one yet). Two hours is plenty, why bludgeon the audience with overkill? They could've ditched the Quidditch game, for starters. Didn't they do that in four of the movies? And cut down some time on the ponderous moody scenes.
And Harry himself, not surprisingly I guess, is the blandest, most boring character in the movie. But even in SUPERMAN or SPIDER-MAN, they make Clark Kent and Peter Parker interesting. Can't they give this bespectacled hero any personality? No wonder Daniel Radcliffe is so bored, he's walking onto London stages starkers!
For most of the film, the inertia, the slow pace and the lack of much action lulled me in and out of sleep until the last 20 minutes, where things start to happen and things perk up. It ends off as kind of the EMPIRE STRIKES BACK of the series....interesting enough of a cliffhanger for me to admit to myself that I probably will see the next two movies, just to see how this whole magilla turns out.
If only I had done that with the last STAR WARS trilogy, beginning with ATTACK OF THE CLONES (because PHANTOM MENACE is a big, superfluous skip)....and with LORD OF THE RINGS, where if you just saw RETURN OF THE KING, which had everything the first two had but better, you got the idea (TWO TOWERS was painful to sit through!). $14 x 3=$42 that I would've have saved....plus 140 hours of viewing time!
I'm glad I came in on movie # 6 of the Potter series, just in time to get into the exciting finale. Call me a Harry Potter carpetbagger!
Posted by Greenblatt the Great! at 6:15 AM