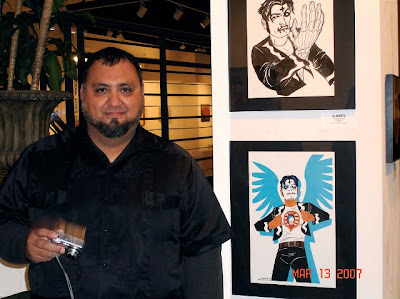 JAVIER HERNANDEZ, the cartoonist behind the superhero zombie comic book EL MUERTO, AZTEC ZOMBIE (and the upcoming MAN-SWAMP and DEMOLITION DOVE comics) is one of my best friends, so consider this interview is complete nepotism. 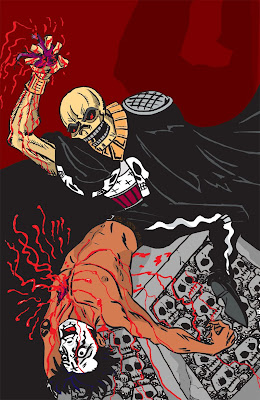 Jav and I once made up half of a small Los Angeles comics collective we called Big Umbrella. Yes, we’re so close, he didn’t even have to sleep with me to get this posted online like the other people (just kidding, other people…I don’t need the libel lawsuits, thanks!)
Seriously though, forget about Raymond, everybody loves Javier! He’s one cool cat, and one of the sweetest and laugh-out-loud funniest guys in the industry. He laughs off the folks who confuse him with members of Los Lobos, and the Pulitzer Prize-winning authors who mistake him from one of Los Bros. Hernandez (it’s true, Michael Chabon once thought he was Jaime at a Wonder Con). At conventions, Jav loves to mix it up with his loyal fans, who often become friends and/or fellow cartoonists he’ll collaborate with.
I don’t have enough blog space, threads and links to go into all of the ridiculous, comical adventures we’ve shared on our parallel journey through comicdom, which often included sharing tables or occupying neighboring tables at myriad shows. I began publishing my comics around 1995, about three years before Javier jumped into the game for earnest with his EL MUERTO comic, which, for the longest time, was just an ashcan version, and yet, before there was even an issue # 2, Jav had all sorts of EL MUERTO t-shirts, figurines, a punk soundtrack CD and posters. And he’s managed to attract Hollywood attention, becoming a 2007 movie (alternate title: THE DEAD ONE) starring WILMER VALDERRAMA. All before EL MUERTO # 2 even hit the comic book shops. 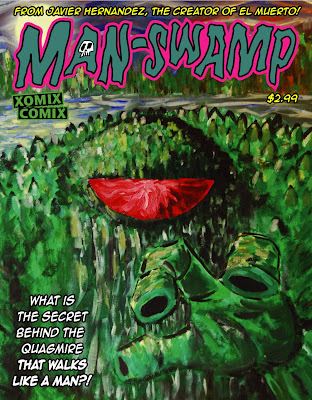 Jav’s upcoming MAN-SWAMP comic has its roots in a little sketch book throw-down between us at one of the conventions, where we had joked about the fact that there were too many stretchy characters and too many swamp creatures in superhero history and wouldn’t it be funny to create yet another. So I created The Stretch Men (a story of which ran in my book FUTURESHOCK: EL GATO 2002) to Jav’s Elastico, while Jav created Man-Swamp to my Swamp-Man. All of it, of course, totally superfluous. Well, for the longest damn time, we put this little joke aside, but in the last year or two, Jav, a long-time fan of Steve Gerber (whose various duck characters partly inspired Demo Dove as well), got all misty-eyed and nostalgic for Gerber’s Man-Thing, and so he decided to take the Man-Swamp joke one step too far with this new book. But no doubt it’ll be a lot of fun. The painted cover already looks terrific. 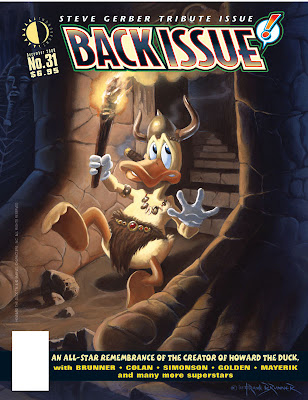 (On a coincidental yet related aside, here’s an article I wrote on Gerber’s Man-Thing, Tales of the Zombie, and other 1970s creature features, for BACK ISSUE # 31 last November, with PABLO MARCOS creating brand new illustrations exclusively for the article: http://westfieldcomics.com/comics-feature/BACK-ISSUE-31-WESTFIELD-EXCLUSIVE-PREVIEW-225)

----Which movies had a profound impact on you while growing up and how did they inspire your art?

THE GOOD, THE BAD & THE UGLY, with it's huge canvas of over-the-top action, operatic drama, and pop art existentialism, probably is one of the biggest wells I draw from. Also, films like MASTER OF THE FLYING GUILLOTINE and JOHNNY SOKKO AND HIS FLYING ROBOT, which I eagerly awaited once a year when they would be shown on local stations here in L.A. (like the fabled Channel 52), had an impact. Those films, and many others, truly were comic books on film: They had charismatic caricatures standing in for heroes & villians and an anything-goes attitude regarding creativity and imagination. What I notice in my own work that definately derives from these type of flicks is the wearing-it-on-their-sleeves pathos of those characters and their stories. 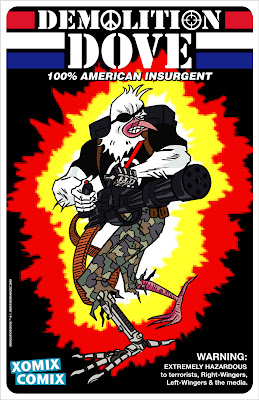 ---- What's the deal with MAN-SWAMP and DEMOLITION DOVE and what will happen with EL MUERTO, AZTEC ZOMBIE when they arrive?

MAN-SWAMP is literally at the printers! I'm awaiting a physical proof, and once I get that back I can put in a proper order for the book. DEMOLITION DOVE is the next book I'll put under the XOMIX COMIX imprint (started by me and my pal Ted Seko), but that won't be out until I finish Pt. 2 of EL MUERTO:DEAD & CONFUSED, which I'm now working on. As for what will happens with Muerto once the Living Quagmire that Walks Like a Man and the Dove arrive? They'll be Three Amigos in my growing roster of comic characters. It's my own little Atlas Comics line-up! Each character lets me express a whole different set of styles and themes, and there's lots more ideas for more characters backed up in my head.

---- Why do you enjoy taking part as one of the Cartoonistas?

The Cartoonistas provide me with an outlet to perform Live Art for interested parties, and also let's me do so in a group atmosphere with my fellow artists. You know what it's like to slave away late at night at the drawing table, with only some Clash or Ennio Morricone playing in the background. Performing Live Art, side by side with the other great talents in the group, is so liberating and stimulating. It's what I imagine performing up on stage in a rock band is like. Then there's always the post-show dinners! 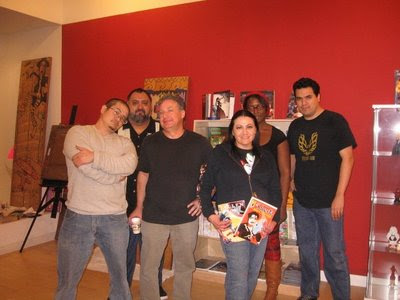 --- If you lived alone on a bluff, and the entire runs of GHOST RIDER, WEREWOLF BY NIGHT, THE HUMAN FLY, MACHINE MAN, and ROM: SPACEKNIGHT were hanging off a cliff (mylar-sealed, in sturdy collector's boxes) and you only had time to save one, which would it be and why?

Rats!! Couldn't you just waterboard me? That'd be easier. Geez Mikey.. It's like being asked to pick either my heart, my brain or my lungs for extraction. I mean, MACHINE MAN is split down the middle with both Jack Kirby and Steve Ditko issues. HUMAN FLY has my favorite Bill Mantlo origin story/motivation for a superhero, and the one character I passionately believed in as a kid. And ROM, glorious ROM, SPACENIGHT, by Mantlo and 'Our Pal' Sal Buscema, with later run by Ditko. Dang it, I just can't choose! I'm jumping off the cliff myself, screw it!! 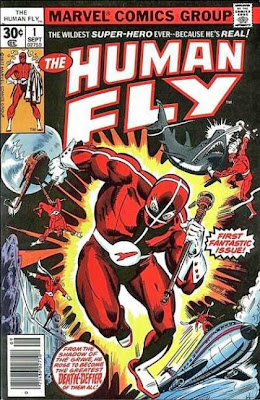