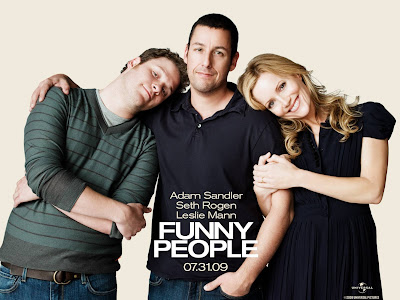 Attended a special screening of FUNNY PEOPLE last night at the Arclight, where they had a Q/A with Apatow afterwards.

Here's comes the money-saver review (but no spoilers, in case you're planning on going)....

I'm sorry to say that this movie is about as hilarious as its poster (which lowered my expectations for it). It's 2-and-a-half hours (what is it about that epic length this summer for every damn film?) of mushy melodrama wrapped in pointless f-bombs and a record for usage of the word "cock." It's just overkill with lame attempts at shock value. This movie puts the nail on the coffin for man-child comedies (to which some of you are probably saying "Good!").

Sandler's character is unlikable from the get-go to finish, so it's hard to care for what happens to him. Rogen is a straight man here. This is a tribute to his stand-up comedy world, so there's a long list of cameos in the film that I will not ruin for you, but it does little to buoy the comedy. The biggest highlight was Jonah Hill. Whenever Jonah Hill was onscreen, it perked up, but there aren't enough of those scenes. And the biggest surprise is that Apatow wrote a generic girlfriend role for his own wife. She's kind of wasted in this one, minus the zing and quips she had in KNOCKED UP.

In the interview portion of the evening, Apatow was a fun interview though. Ben Lyons (of the current version of "At the Movies") moderated the discussion, which went quite long for these things (but in this case, it was entertaining).

On the way out of the screening, Ed Helms (Andy on "The Office" and "The Hangover") walked past me briskly toward the Dome. Perhaps he was hurrying to meet Apatow? (Or kick his ass for making this film?)

Anyway, you've been warned! Although the poster should've been a major red flag!
Posted by Greenblatt the Great! at 6:42 AM