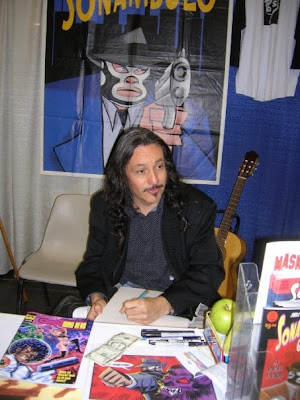 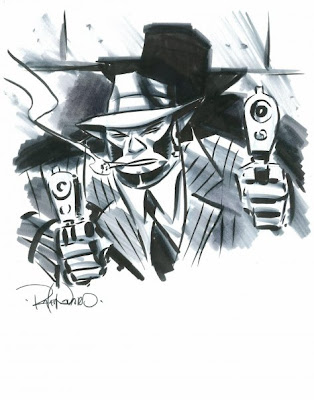 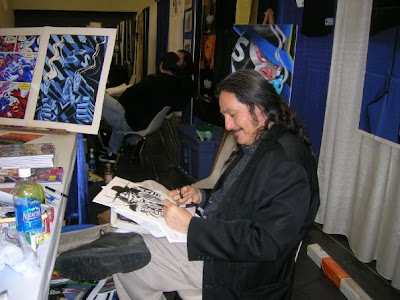 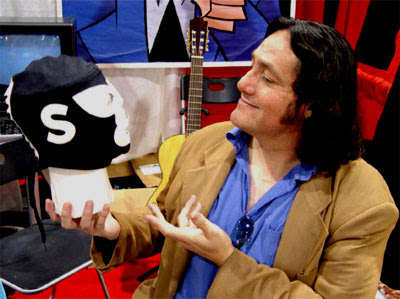 This was the toughest Q&A I’ve ever had to post. YOU try narrowing down the visuals for this one, it’s an abundance of riches.
RAFAEL NAVARRO is one of the most gifted artists I’ve ever met. He’s a master, he’s got natural pizzazz, and his work is always dazzling at the least. In the last decade or so, he has honed his art, incorporating stylistic elements from his gigs storyboarding in animation (for such cartoons as “Spectacular Spider-Man,” “Scooby-Doo” and “Rugrats”).
But comic books is where his heart and his art is, first and foremost: SONAMBULO, his luchador detective series.
Raf and I are old friends with a lot of water, tequila and margaritas under the bridge. When we met in the mid-1990s, as members of our local cartoonist society in Los Angeles, CAPS , we were just about the only two American cartoonists riffing on old Mexican wrestler flicks: him via SONAMBULO and myself with my EL GATO, CRIME MANGLER series. Only Charles Burns’ great EL BORBAH was out there at the time. Cut to 2009, and there’s already been a glut of luchador superhero comic books and Mexican wrestler-themed films and cartoons (some of them dubious, most of which have crashed and burned). Not SONAMBULO: Raf will debut SONAMBULO LIVES! at San Diego Comic-Con in two weeks at his booth, # 2206 in the Independent Pavilion.
Raf and I were both members of the short-lived, now-legendary (and now-defunct) imprint Big Umbrella, with JAVIER HERNANDEZ (“El Muerto, Aztec Zombie”) and RHODE MONTIJO (“Pablo’s Inferno”), which fell apart (but not over a falling out). 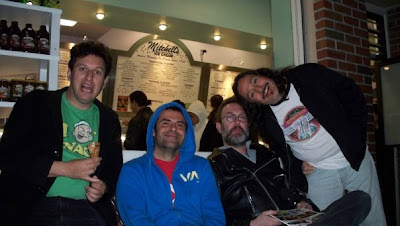 (Here's a shot of me, Rhode, Brad Rader and Raf in San Francisco, up for 2009's WONDER CON, when we paid a visit to our favorite Bay Area ice cream palace, MITCHELL'S!)

Raf and I have contributed to each other’s lucha-themed comics. He illustrated (quite lushly) one of the stories I wrote for my 2003 anthology book, THE NINE LOVES OF EL GATO, CRIME MANGLER, contributed a space-age SONAMBULO strip to my FUTURESHOCK: EL GATO 2002 comic, and way back in 1999, he provided a pin-up (and executive produced) ¡HOLY GHOST EL GATO! (in which even our mutual friend’s cat Cosmo somehow earned a credit!). I contributed a story to his anthology, MASKS OF SONAMBULO. 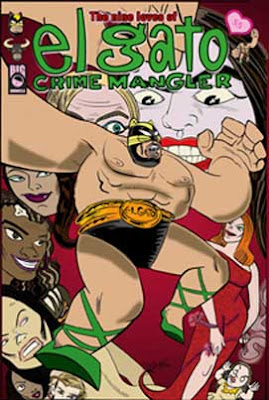 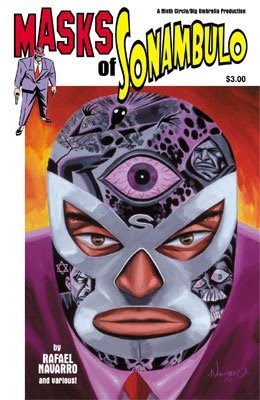 Most recently, I’ve had the pleasure to collaborate with Raf on the delayed-yet-fantastic full-color comic book GUMBY’S GANG STARRING POKEY (Wildcard Ink), which we finished last year and which will be a winner as soon as the company can get it out (and I’ll alert you to that as soon as I know). It’s a time-travel yarn which starts off on the right foot with this glorious painted cover by Mr. N. 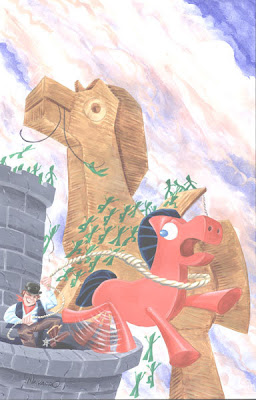 Anyway, if you’re going down to San Diego, visit his table. He’ll no doubt be sketching away in his sketch book. In case you haven’t figure it out (and if you haven’t, check the prescription on your glasses), this man loves to draw!

---- Who are your 5 all-time favorite CAPTAIN AMERICA artists and what did each contribute to making the series great?

Hands down: Here's my personal favorite Cap artists (no particular order, other than when they started their runs):
1.) Jack Kirby- Always forever engraved as the true, and definitive interpretation of the sentinel of liberty...His Cap exemplified the most power, and dynamic energy even in the most subtlest of poses, as well as a dignifying character showing nobility, and pathos when needed...His was the mold that everyone has since followed. When I think of Cap coming to life, whether on paper, or now on screen, his is the one that comes to mind first. Wagnerian and as it is American, his is the most convincing.
2.) Jim Steranko- Handsome as it was equally powerful to Kirby’s, Jim’s Cap was very much the first, true modern interpretation of the character. He introduced fresh, bold, and untried storytelling ideas unheard of at the time, while keeping the original vision and integrity of what was previously established. Cap suddenly had a contemporary graphic sense equal to modern art at the time. Sadly, his run was so brief, but what little he did of the character has permanently placed him in the annals of comic history.
3.) Gene Colan- Again, following what had previously been done, Gene’s Cap captured both the modern and powerful graphics established before, but with a new twist: Atmosphere! His lighting, and sense of composition gave an amazingly new approach to the character, giving it an almost other worldly look and feel. To this day, his designs of the character and his weird villains have uniquely placed him in a category all on his own. Another important note is that he was the first artist to draw The Falcon.
4.) Frank Robbins- My first introduction to Captain America came from this man. His approach echoed back to an age of swashbuckling heroism found only in newspaper strips and movie serials. It was wonderful to see the excitement come to life with his brush and ink work created monthly as a child. Quite possibly my earliest art lesson ever, Robbins taught me to be bold and spontaneous while having the discipline of detail and texture. It was simply operatic and I will always cherish it.
5.) Gil Kane- With just a mere handful of Captain America stories to his credit, his work on the character truly came to play as a cover artist. Month after month, he depicted the character submerged in heinous peril, utter defeat, and eventually, triumphant victory over the forces of evil. With his exceptional poses and majestic anatomy, if there ever were an artist to bring such Grecian heroism and interpretive realism with such conviction and without falters it would be Kane. 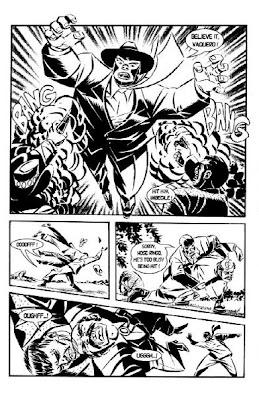 ---- Is your luchador detective character SONAMBULO alive or is he a ghost, or is it none of our business?

At the moment, we don’t know for sure…I’d like to say he’s just metaphysically misplaced! 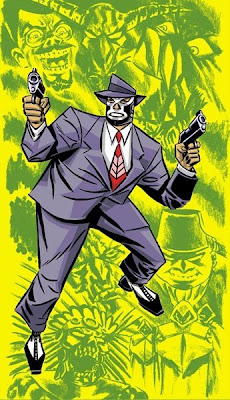 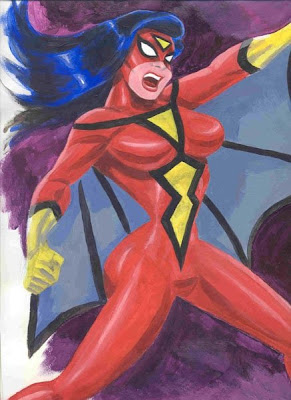 --- Kirby, Steranko and Frazetta get into a brawl. Who would be the last man standing?

That’s tough to say! It’s like saying what’s my favorite ice cream flavor! But after a long, and epic battle, I’d say it would be either Jack or Frank, not because they’re any tougher than each other or Jim, but because if they’re not home in time for dinner, they’d have to face an even tougher opponent: their WIVES! 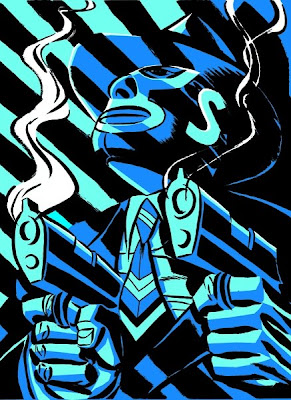 Posted by Greenblatt the Great! at 9:53 AM

Rafael Navarro is one of the best cartoonist that I've seen in my life. He has an enviable talent, that is difficult to find across the world. I really enjoyed watching his job.