I had a terrific Fourth of July weekend in Pacific Palisades, where I was covering the annual parade. It kicked off on Friday with an afternoon hike at Temescal Canyon, followed by a barbecue function at the polo grounds at Will Rogers State Park. I got to take a quickie tour of the Will Rogers house, perfectly preserved. It includes watercolors by Rogers' good friend, my favorite cowboy artist, Charles Russell. 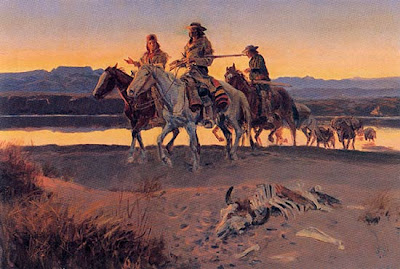 When I was a kid, I adored Russell's art and his master illustrator's view of the American West. He was the Norman Rockwell of cowboys, and the fact that he was a true cowboy gave him a one-up over Remington, a Yalie whose work I didn't dig as much anyway. So I was quite entranced with the Russell watercolors and sculptures at the Rogers' house. That tour of Rogers' house is free by the way (not counting the $7 parking fee at the park).

That was July 3. On July 4, I covered the parade, which was overall more fun than last year's (my first year covering it), although I preferred last year's guest of honor, "Happy Days" actress Marion Ross, over this year's grand marshal, Ms. America.

A few barbecues later, my gf and I wound up at an El Medio party seeing the fireworks launched from PaliHi at 9 p.m. (as they do every year). Gavin turned up as one of the guests (dressed in the Evil Knievel-style bicentennial suit he wears every year in the parade). Rows of chairs were set up in the front lawn of the host's home, facing the high school just beyond across the street. However, the view was obstructed, so we spent a half an hour staring at silhouettes of the palm trees across the street, with fireworks exploding behind them. It was ridiculous and hilarious. But I don't want to sound like I'm ragging on the affair, the party was a lot of fun, and once you've seen fireworks, they don't really change much from year to year.

Facebook is a Pandora's box from the past. Above is a photo of myself (far right) and my longtime buddies Eric (white shirt, probably doing his best Cagney) and Rich (print shirt), circa our Fairfax High years, which a mutual friend posted. The metalhead in the back was someone I didn't know too well in h.s. This photo cracks me up, it's very Rat Pack meets Beastie Boys (with a touch of Twisted Sister).
Posted by Greenblatt the Great! at 5:48 PM