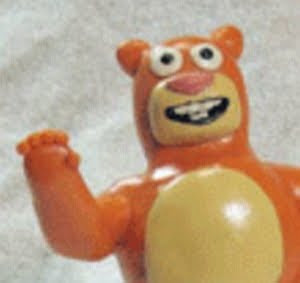 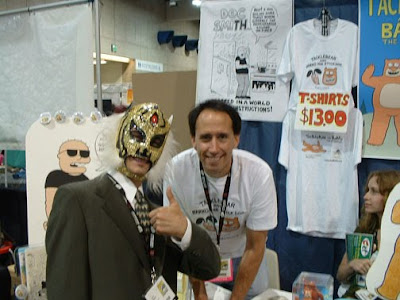 This blog post is dedicated to my buddy in San Diego: fellow Southern California Cartoonist Society (SSCS) member Dean LeCrone. It's not many people who tout themselves as "Actor, Filmmaker, Cartoonist" (I think it's out of order, by the way, Dean...).

Dean's been away from the drawing board for way too long. The years have flown since his last TACKLEBEAR & STICK BOY comic. Or a DOC SMITH gag strip. Well, with good reason...we lost a very talented cartoonist to the film industry when he starred, wrote and directed DEAN LECRONE VS. THE MUTANTS OF COMIC-CON, which is available on DVD via www.deanlecrone.com and is not to be missed. Believe me, there have been many a poke at Comic-Con (and I've even been roped into making cameos in some of them), but none of them are as hilarious or dead-on precise as DL VS. TMOCC. Let me put it this way....if San Diegans had to band together and create a 21st century time capsule for future generations, and they could only put one artifact to represent Comic-Con, I would toss in a copy of Dean's flick. It just sums that shit up!

But now it's been a while since we've had a new LeCrone comic or a follow-up movie and so, in a devilish move, I am posting this to kick LeCrone's ass a little and get him to pick up a pen or a movie camera again. Just call me a "LeCrone Crony!"

Other friends and fans of Dean, I need your help: please contact him at his Web site and tell him to get on it! That means you, too, Dean-O!

Posted by Greenblatt the Great! at 8:49 PM

Good golly, Michael! This could be a more pressing movement than getting Iran to give up nukes! Count me in, cause that LeCrone guy makes some funny comics. And looking over the landscape of morose and artless comics spewed all over the racks lately.... WE NEED DEAN LECRONE BACK AT THE DRAWING TABLE!

I've introduced a new piece of legislation (SB L8-CR0N8) through the Assembly in Sacramento which, if passed, would, in effect, force Dean LeCrone back to the drawing board by garnishing his wages and blocking his benefits until he submits 24 new pages of comics. It's a tad extreme, but it's the only way I can think of to enact some progress....that or perhaps a popular election.

Where in the world is Dean LeCrone? Last I heard he was building an evil fortress in Rancho Bernardo!