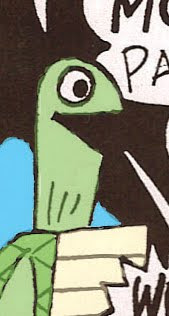 Here's a run-down on the current projects:

- CARTOON FLOPHOUSE FEATURING GREENBLATT THE GREAT! #3 officially debuts at APE in San Francisco in October 2010 in magazine form, but the digital download version (currently a featured book at Wowio) can be purchased at the Cartoon Flophouse page at Wowio.com 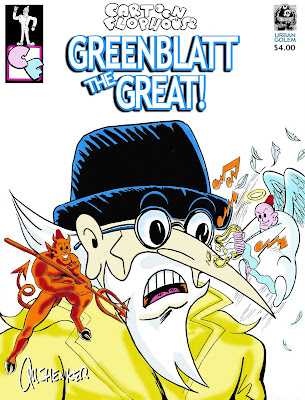 - CARTOON FLOPHOUSE FEATURING GREENBLATT THE GREAT! #4 is almost done, to be released next year.

- The long-delayed EL GATO, CRIME MANGLER trade paperback is still in the making.

- I'm finishing up a 7-page story for the GHOULA comic book, which should be out by October 2010.

= Next month (July) I'll resume the weekly Greenblatt the Great! strips here at the CF blog spot after a few months' break. This will mean more to new readers than loyal Flophousers, as I don't plan to post new material. The new stuff will be for sale in comic-book magazine form.

Contrary to many web cartoonists, I don't think posting new material up for free and then trying to compile and sell them in book form later is the best way to promote or sell work. It only undermines sales and gives into this ridiculous construct that everything should be found online for free. I know that if I read an entire book online, it would be very doubtful that I'd buy the book later. PLUS....I personally prefer the book format to read comics - by day's end, I'm sick of computer screens and I like to read in bed or in the bathtub, and computers are not good for that.

My personal feelings about the Internet: sure it's a good marketing tool - to a point, anyway, you still need to be able to drive traffic over to the website in order for a website to be an effective marketing tool. And that's the trick, it's tough! By offering content for free, the Internet has done much to devalue the worth of writers, artists, photographers, moviemakers, musicians and other creatives. If you truly want to support your favorite artists, spend the money and patronize their work. No artist is going to make more than a couple of bucks off the Web (unless you're a porn artist and handy with a web cam).

OK, I'm stepping off my soapbox.

Biggie/'Pac forever! Enjoy the weekend!
Posted by Greenblatt the Great! at 7:17 AM

Well, I am a died in the wool traditionalist when it comes to comix (and print media in general). I may read some things online just to stay in the know and/or merely to try new things, but at the end of the day I do prefer actual copies I can read anytime, not just when staring into overpriced gadgets.
So I completely agree.

Ditto. I still prefer reading a newspaper even though, by convenience, I generally read more articles online these days.

But a magazine like THE KIRBY COLLECTOR or BACK ISSUE - I much prefer the real thing over a PDF.