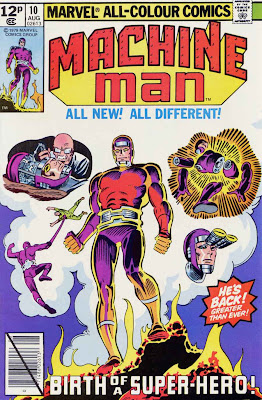 With issue #10 of MACHINE MAN, artist Steve Ditko, with writer Marv Wolfman, took over the Jack Kirby book/creation MACHINE MAN in May 1979. It's a beaut, and Ditko is at the height of his late-career powers. Marvel was damn lucky to have him back, that's for sure.

What made the MACHINE MAN series one of my favorites was that the book was that, looking back, it was equally split between Kirby and Ditko and no other artist. Kirby wrote/drew #1-9, Ditko 10 through 19 when the book was canceled. In retrospect, this bomb was a magical run. Like Kirby, Ditko made Machine Man his own. Two wildly different interpretations on one character, both unique, both amazing. 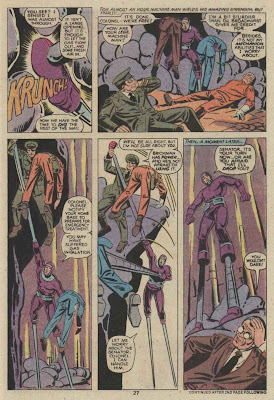 I always thought Wolfman's writing left much to be desired, and he was only as good as the artist they paired him with. As long as he doesn't get in the way of the story, his writing is tolerable. I wouldn't read TOMB OF DRACULA without Gene Colan's art, or TEEN TITANS without George Perez drawing it, or SPIDER-WOMAN without that nice Carmine Infantino art....and I'm sure Ditko's storytelling sensibility enhanced the MACHINE MAN storylines, which may have been better written under Kirby's reign on the book. As clunky and rambling a writer as Kirby could be, he was always clever and he always knew how to hook you in. Wolfman, as this worst, writes like an accountant.

If you go to this link, you can read the entire issue of DC's MACHINE MAN#10 posted, as well as Ditko's MAN-BAT #1 at DC Comics. 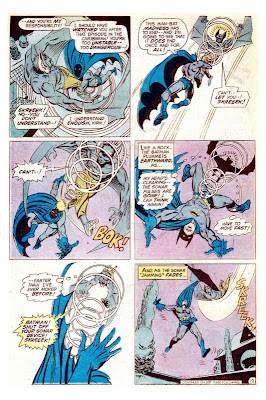 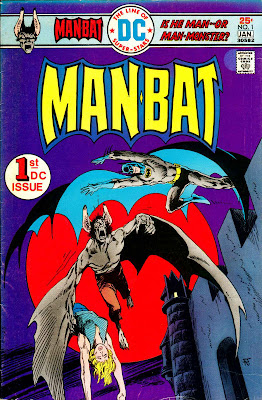 Posted by Greenblatt the Great! at 6:49 AM

Michael, i couldn't agree more. Back in the day I read all of those issues of Machine Man, the first ones by Kirby and then the second half by Ditko. And you're so right about Marv Wolfman and the artists on the titles he wrote. I read Titans and Spiderwoman too, and yeah, Infantino and Perez were a major part of Wolfman's success etc. etc. Back to Machine Man-- I read 2001 A Space Oddyssey, the series by Kirby, where towards the end of the run, he launched Machine Man, but he was named "Mr. Machine". I remember when the character was given his own series, I didn't like the "Machine Man" name change and thought Mr. Machine sounded much cooler. But i didn't really care too much, because it was yet another great Kirby series for me to dissapear into.