GEEKS CON is ON! And CARTOON FLOPHOUSE will be in da house! (WHITTIER, CA) 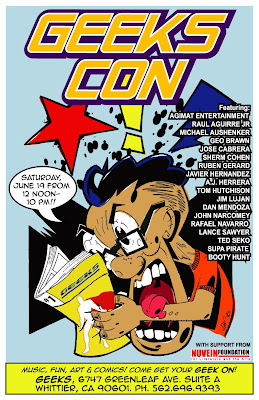 This just in.....GEEKS CON is coming in a couple of Saturdays -- JUNE 19th. What? Do I really have to spoon-feed you? It's all in the poster, folks! Take a gander, silly goose!

I'll be there, as will the other half of the brand new CARTOON FLOPHOUSE crew, funnyman cartoonist Jose Cabrera (CRYING MACHO MAN). So will all-stars (and friends o' mine) RAFAEL "SONAMBULO" NAVARRO, animated cartoonist extraordinaire JIM LUJAN (JOHN HENRY UNICORN), the AGIMAT crew (SHADOW CANDY) and the incomparable TED SEKO (ATTACK OF THE SUPERMONSTERS, BILLY COLE). SHERM COHEN is an animation vet (HEY, ARNOLD) who worked with Mr. Seko on SPONGEBOB SQUAREPANTS).

JOHN NARCOMEY (HIGH TOWER COMICS) and JAVIER HERNANDEZ (EL MUERTO, AZTEC ZOMBIE) did the terrific poster art above. They're not only bringing the fine art of poster art back, they're among the cartoonists selling their latest stuff at Geeks Con (I hear Javy debuted a new Weapon Tex-Mex book at Phoenix Con. Hopefully, he'll have some left...). And Geeks, run by the mighty Sal, always does a stellar job hosting these in-store events, where the minglin' is tinglin' ---and the food and wine are quite fine. If you live in the area, be there like Hank Azaria! (on a "Simpsons" episode--get it????)

I love Uptown Whittier, and with the Cartoonistas in the jointsky, you can bet there'll be lots of laughs and some spontaneous live art jams! Hope to see you there......
Posted by Greenblatt the Great! at 6:50 AM