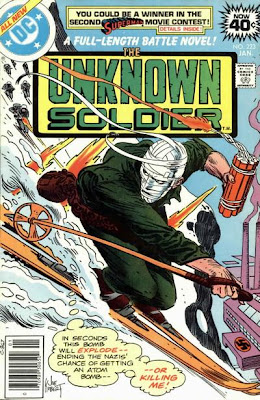 June marks the 40th anniversary of the first appearance of one of my favorite DC Comics. It's a sleeper for sure, not even a superhero. And I've never been a World War II comics nut. But all that goes out the window with the fun feature known as THE UNKNOWN SOLDIER, originally created by the revered writer and editor of DC's war comics, Robert Kanigher, and artist Joe Kubert.

As Wikipedia explains: "The Unknown Soldier's first appearance in Our Army At War #168 was in a Sgt. Rock story, "I Knew The Unknown Soldier!", written by Kanigher and drawn by Kubert. Kubert, who also edited the DC Comics line of war comics at the time, decided that the character was interesting enough to be featured in his own series, which began some years later in Star Spangled War Stories, running from #151 (June-July 1970) to #204 (February 1977). Eventually, Star Spangled War Comics began featuring the Soldier exclusively. With #205 (May 1977), the book changed its title to The Unknown Soldier, continuing the numbering and running for another 64 issues, ending with #268 (October 1982)." 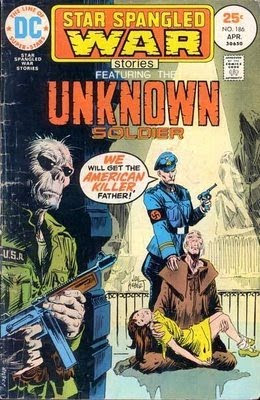 What Wikipedia doesn't mention is that the series took a really cool turn when writer David Michelinie and artist Gerry Talaoc boarded the book in #186 (above), which is also the first issue to reveal the face under all those bandages. Talaoc's distinctive stylized art is a hoot and gave the chameleonic master-of-disguise soldier some incredible style. I tracked down Mr. T for an interview for an article on UNKNOWN SOLDIER in BACK ISSUE #37, which came out last year, and a career overview will appear in BACK ISSUE #49 next year. On later issues, Talaoc inked a veteran of WWII comics, Dick Ayers, to great effect, as Ayers is a consummate storyteller. And then there's those terrific Joe Kubert covers that graced every issue, giving it some artistic continuity.

Oh, and if you're biting your nails waiting for an UNKNOWN SOLDIER movie, an urban version of it already came out in 1990 (sort of): 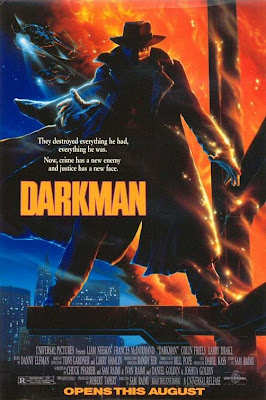 The reprint collection SHOWCASE/UNKNOWN SOLDIER, VOL. I is a great place to start on getting to know the comic. Now if only DC will release volume II, which promises to be back-to-back Talaoc! I'm spinning my Judas Priest album right now, filled with subliminal commands: "Do it, DC! Do it!"
Posted by Greenblatt the Great! at 7:37 AM