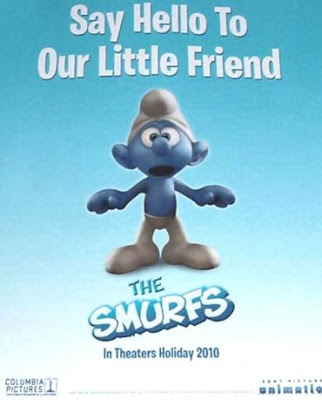 I am clearly losing it because I actually don't think this trailer is all that bad. I enjoy the little Smurfs hanging onto the cab for dear life, not to mention the Tone-Loc/"Smurfs" theme mash-up.

One thing's for sure: it looks more entertaining than anything out in theaters right now. Better this than THE A-TEAM!

One day, they'll look back on Summer 2010 as the turning point when movies crossed a line in stupidity and our entertainment has been dumbed down below stupid levels. This is shaping up to be the Summer of Dumb. Halfway through the popcorn movie season, here's where we stand.

IRON MAN 2 barely had any Iron Man in it, and the two big scenes he appears in make no sense at all. Rhode/War Machine picks a fight with Iron Man in front of a large crowd of civilians. Whiplash fights both Iron Men with his helmet off, thus making his head vulnerable to repulsor rays. Oh, and Tony Stark's "alcoholism" is barely touched on here, but it's played for laughs like he's a frat brother.

ROBIN HOOD is released against IRON MAN 2 in its second week. I guess its producers didn't want to make money.

SEX AND THE CITY 2 is so after the fact, they can all be grandmothers. And it apparently has scenes in a Middle Eastern desert.

THE KARATE KID should be called THE SHAOLIN KID because karate is Japanese and this film stars Jackie Chan and takes place in Beijing.

THE A-TEAM got its Ass-Team kicked by KARATE KID, which made more than double A-TEAM's gross on opening weekend.

GET HIM TO THE GREEK probably should have been retitled as well, as it's doubtful that most people outside of L.A. is aware of the Greek Theater.

SHREK: 4, TOY STORY: 3, in case you're keeping score of the redundant sequels.

MARMADUKE should have been a sure thing in the kiddie department, given the success of ALVIN AND THE CHIPMUNKS, GARFIELD, and even BEVERLY HILLS CHIHUAHUA. Somehow, it arrived DOA!

KNIGHT AND DAY is looking like the big budget version of THE KILLERS, which also made zero at the box office. And despite Tom Cruise, it's already tracking WORSE than KILLERS! Good luck with that one!

Anyway, you get the idea. The movies out there are ridiculously bad. I have some hopes for JONAH HEX because at least it's an original movie and it's a co-creation of a great artist, Tony DeZuniga. But I already read a bad review for it. CYRUS looks like it could be a good little movie but not something I need to see on the big screen. I'll let you know what I think of JONAH HEX after the weekend, folks.
Posted by Greenblatt the Great! at 9:16 PM