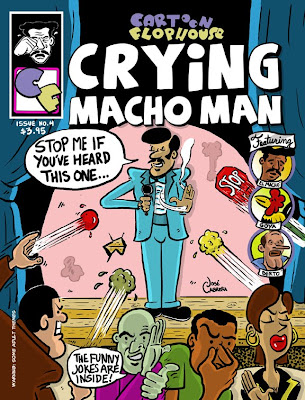 CRYING MACHO MAN #4 is out now, and my Cartoon Flophouse partner-in-punchlines, cartoonist JOSE CABRERA, will be signing them at the A Wave Blue World booth (K-11) in Small Press at Comic-Con.

CRYING MACHO MAN #4 is Jose’s latest collection of hilarious gag cartoons. This one is loaded with Marvel and DC superhero shout-outs, as Superman (twice in one book!), Spider-Man, Batman, Wolverine and Ghost Rider all get the CMM spoof treatment. And hell, while Jose was at it, he lampooned another cartoon character: ME! Look for Michael Aushenker among several of the Cartoonistas (Jim Lujan, Javier Hernandez and Ted Seko among them) in a waiting room scene. Sheesh, the man’s pen can not stop with the mocking!

Also, this issue features a preview of Jose’s riff on “Ghostbusters” for the GHOULA (Ghost Hunters of Urban Los Angeles) comic book due in October (I’ll be contributing to that book as well). I rank #4 high up there, second to CMM magazine #2 among my personal favorites. All four of Jose’s cuckoo-bird CMM magazines can be found here (the real books) and here (the downloadable versions) so if you can't see Jose in person next week, order today! 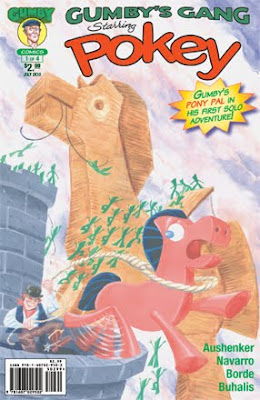 For those of you attending the biggest Comic-Con of all time.....come on out and give Jose and I a shout-out when at San Diego Comic-Con!

See you in Sunny Sandy Eggo!
Posted by Greenblatt the Great! at 9:55 AM

And doesn't S-eptember 11 figure prominently into the Cartoon Flophouse plans in the near future...?

So great to see Jose's work in comic book format. And your long-anticipated GUMBY book looks like a winner.

You guys got the market cornered on corny comics, that's for sure!

That's right, Javier, more on the meaning of September 11, 2010 upon my return from San Diego. I'll be posting and GEEKing out about that event for sure.

Meanwhile, thanks for the praise, buddy. Looking forward to Old Town, one week from tonight, aiight! Chill the margaritas, mamacitas! We're comin' to San Diego!