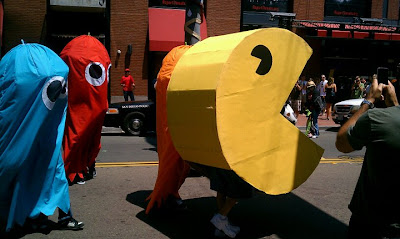 Once more photos come in, I'll share some of the behind-the-scenes of this year's Comic-Con. In the meantime, I'll say that I had a terrific time at the Gumby Comics table, where I kept company with Mel Smith, the publisher of the comic book I wrote and was promoting, GUMBY'S GANG STARRING POKEY, the book's colorist Lance Borde, and, on occasion, artist Rafael Navarro (he was dancing at three weddings at once, hopping from table to table to promote and sign different projects). They kept me in stitches as we bantered with the crowd and SOLD OUT of POKEY #1 by Sunday evening when the entire shabang wrapped. It was a madhouse, and person after person, family after family, all lit up when the discovered the Gumby table. Gumby and Pokey still carry a lot of popularity, charm and fond memories for those who grew up on those classic claymation shorts. 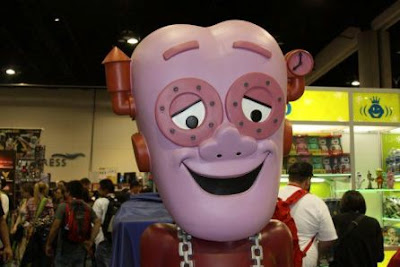 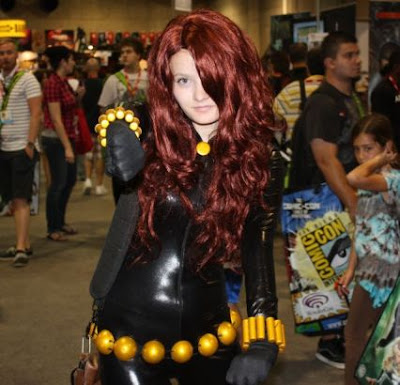 Some costume highlights for me: Pac-Man and all four ghosts (Clyde, Pinky, someone and something) paraded by the Gumby Comics table at one point (see top). They were definitely a cosplay highlight, as was the guy dressed as the black & white Superman (either George Reeves or Kirk Alyn) who looked like he stepped out of a black & white show like in PLEASANTVILLE or something... and the chick disguised as the old-school comic book Black Widow (as in the Champions, not the iffy Scarlett version in IRON MAN 2), yellow belt, webshooters and all (see above, middle). 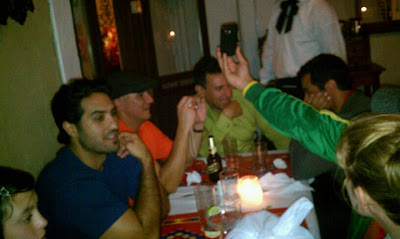 Every year, we hit Old Town for our annual Mexican feast in San Diego's historic old section. Usually, it's the day when cartoonist Javier Hernandez (EL MUERTO, AZTEC ZOMBIE) comes to town. This year, he didn't come down (too busy running his own convention in L.A., I hear...) but we still managed to get a good crowd over there on Saturday night (July 24)...and we even phoned Jav from our table and put him on speaker phone!). From left to right you can see Geneva and Adrian (the goddaughter and cousin of my buddy and official Comic-Con host Alex Vallejo), Alex Vallejo in the mean cap, that's me in the middle (in case you missed the bright Gumby green shirt), HAPPY TREE FRIENDS, CLOUD BOY and PABLO'S INFERNO creator Rhode Montijo, who debuted his new children's book THE HALLOWEEN KID (Simon & Shuster) a month in advance of its official release), CRYING MACHO MAN and CARTOON FLOPHOUSE compadre Jose Cabrera (the green track suit) and his firecracker wife Naomi Tucker. Also at the table on the other side (unseen here) was the photographer, letterer, and all-around dynamo Kathryn Renta, the King of Cool Stan Yan of Denver's SquidWorks cartooning group and some of his cronies, and Gras from the Cartoonistas, who drank us all under the table with three large margaritas (as she was staying in Old Town and not driving anywhere, she earned her right to part-tay). 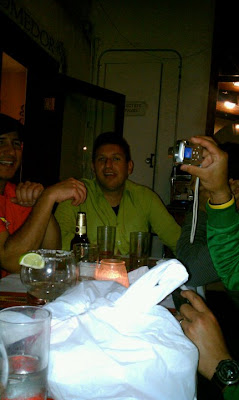 Here I am leading a toast to Squidworks leader Stan Yan and my buddy, Alex Vallejo, both of whom became first-time daddies to cute little boys (Milo and Josh, respectively) within the last year. Miss Kathryn Renta, letterer extraordinaire, captured the sound and the fury of our annual Old Town outing with her photos, which started off on an awkward note when we learned on the trolley ride over that the restaurant we always hit (La Hacienda Rena) was no more. Rhode and I were the first to figure out while en route, based on field reports by Gras and Alex, who had made it over to the now-defunct restaurant first, that la Hacienda was la Hasta la Vista! But we kept it mum because we didn't know how to break it to the rest of our merry gang (which was pretty formidable in posse size). Once at the poor, ghosted-out restaurant, I laid a lone flower on the door knob of La Hacienda - a symbolic tear drop from all of us in memory of all of the good times we had enjoyed there year after year).
But after a long march to the courtyard area of Old Town, we quickly rebounded when Chris Salas of Colorado Springs from the SquidWorks crew led us like Moses to a restaurant that was big enough and empty enough to accommodate all of us. In no time at all, we forgot all about the old restaurant we used to go to and all of those musty ol' memories attached to it! Wa-hoo! The new place was awesome, even with the crazy music playing in the background. Yes, the food and drink was pretty good (especially the tortilla soup!) and we hope to revisit the place next year! Viva la new place!
Oddly enough, Stan and Rhode had suffered bouts of laryngitis at different points of the convention, as did one of the Wowio.com reps I finally met in person during the Wowio yacht party on Friday night (July 23). (For whatever reason, laryngitis was definitely an unofficial Comic-Con 2010 theme this year...maybe it was the June Gloom-in-July weather that dominated the week?) Mr. L is the one person you don't want visiting you during Comic-Con...I had my voice blown out one time many years ago and it's a struggle trying to sell customers on your comics when you can't even talk to them. Stan found a creative way out of that: he put a note on his Comic-Con badge telling the folks that he couldn't speak but inviting them to buy his comics. The good news is that I don't think it lasted for more than a day for each of them. 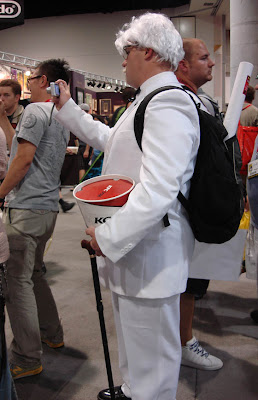 OK, back at the convention hall with more wackiness. Ladies, lock up your chickens, the Colonel is back in town! I'll have more on this year's convention as friends' photos come my way...for once, I didn't have a camera of my own!
In addition to Mr. Sanders,there was an old-school Mighty Thor (blue dots and all) and the lame-ass Silver Surfer (in the shorts, covered in silver make-up) cracked us up (too bad I didn't snap a shot of that guy). And at the Gumby Comics table, we had some cartoon character muscle of our own as Gumby himself appeared on Friday and Saturday, inciting the crowd to pose for pictures.
Oh, yeah, and Rorschach from the Watchmen (not actor Jackie Earle Haley, who was also there, but a cosplay version) bought a copy of POKEY #1. So it's official: the Watchmen love Gumby & Pokey! Pass it around!
The bottom line: one of my favorite Comic-Con experiences of all time...and leagues better over last year's weak week, when the convention seemed to be on automatic pilot and everything was "Eclipsed" by a certain TWILIGHT movie.
San Diego Comic-Con 2010 rocked the house! Let's hope we can still call it San Diego Comic-Con in 2014!
Posted by Greenblatt the Great! at 9:25 AM

Ha! This must be the first San Diego Comic Con report I've been mentioned in FOR NOT BEING THERE!!

Sounds like another madcap week in San Diego. Nice rebound on the disappearing restaurant trick! It's funny how you kept the news from everyone until you got there! WTF?!

Glad your new Gumby comic sold out and got some good buzz. Hopefully you'll be doing more issues. We need fun comics, and we need more Gumby and Pokey.

Nice report! One correction, the eatery that closed was "Rancho La Lena". I'll have my own report up soon in comic form, as I drew a 10 page report on the drive back to Denver!

Hey, Jav, we missed you down there. We'll make sure you come down next year even if we have to get the Green Goblin to lend you his glider. Or would you rather the Shocker taser your butt down to San Diego? It's your call!

Stan, thanks for the elusive name of that restaurant. Rancho La Rega will be missed!