Per the last post, here is my contribution to the 40th Comic-Con Souvenir Book. It's my tribute to the late, great Jay Ward, creator of Rocky and Bullwinkle, Superchicken and Fred, Peabody and Sherman, George of the Jungle, and various commercials including Cap'n Crunch...... 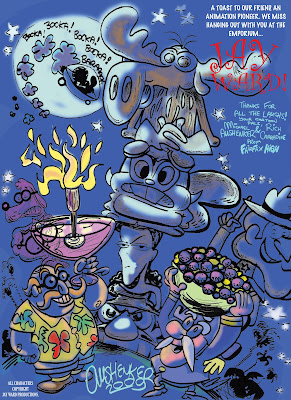 For some reason, I thought this tiki-themed take befit the tone of Ward's crazy, California-bred cartoons, even though I could never truly do justice to Ward's unparalleled legacy.

I roped in my pal Rich Carradine into the tribute, because as Fairfax High students in the late '80s, Rich and I used to go up the the (now defunct) Dudley Do-Right Emporium on Sunset Blvd. in Los Angeles (across from the Chateau Marmont, next door to the former Jay Ward Studios building...yes, the one with the giant sculpture of Rocky and Bullwinkle). The Emporium, a store dedicated to Jay Ward Cartoons merchandise, was run and operated by Jay and his wife. Rich and I were fortunate enough to have shared some times talking up the shy but genial and accessible animation pioneer and pester him with our probing questions, such as what the connection was between Ward and Underdog, and other arcane inquiries inspired by too many hours watching Tom Hatten's "Popeye and his Friends," which featured Ward's cartoons. We'd follow him around as he made his rounds on Sunset, dropping envelopes in the mailbox and grabbing a sandwich at Greenblatt's Deli.

Anyway, I not only miss Jay Ward, but I miss the entire school of witty, pun-drunk cartoons (making sweet lemonade out of limited animation) which he created and which no longer truly exists. Cheers to you, Mr. Ward!
Posted by Greenblatt the Great! at 7:32 PM

Thanks, Annie! Much appreciated!