Well, it's a small world after all: cartoonist JIM WHEELOCK meets DAVID CARRADINE in Birds!

Cartoonist JIM WHEELOCK posted the following on his Facebook page:

I'm saddened by the death of David Carradine. I had a drink with him about a year ago at Birds in LA. The place was about to close, empty except for me, and he snuck in for a beverage. Nice guy. I said I was an illustrator and he told me he had originally wanted to be a science fiction artist but got an acting job and took that course instead. He was a fan of the great pulp artist Edd Cartier. I took this photo.. 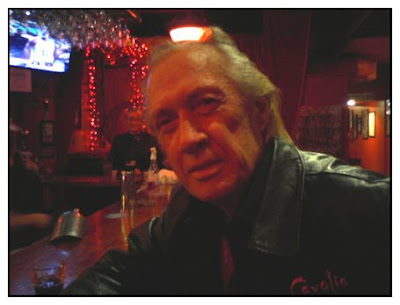 Jim is an old friend of mine from my CAPS cartoonist society (and a contributor to my 2003 comic NINE LOVES OF EL GATO, CRIME MANGLER), via which he's come to know my buddy, Rich, because Rich used to tag along for many meetings as my guest. David was one of Rich's uncles, and, back in 2004-2006, Rich and I were weekly regulars at Birds on Franklin Avenue (home of the best onion rings), where we used to pal around with our good friend and former Angeleno, Jamie Alan. In fact, if you walk into Birds and turn left, on the far wall, behind the booths, is the oil painting I made capturing the Birds scene, which Birds owners bought and hung in the bar/restaurant.

Rich and I were aware that Jim was something of a Birds barfly, because we ran into him coming in one night when we were on our way out, but this just ties it all together.

Thanks, Jim, for the story and photo.
Posted by Greenblatt the Great! at 8:47 PM