...Tower Comics has just announced that they're bringing Menthor back to life, 43 years after knocking him off! In fact, he was never killed but has been found residing in a giant yellow circle outside of Jacksonville, Florida all along. Who woulda guessed? 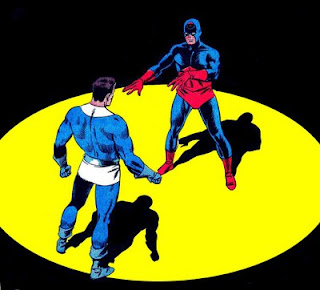 And no, the fact that "Menthor: The Motion Picture" is in development had nothing to do with Tower Comics decision to bring Menthor back.

(Now if only someone would bring Tower Comics back from the dead, that'd be a stunt!)
Posted by Greenblatt the Great! at 6:49 AM