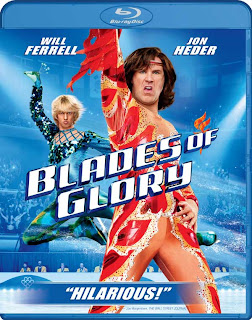 I finally caught up with this one on DVD and it was mediocre at best. The premise was not particularly imaginative or likely, I didn't like Jon Heder in it, and the villains were too daffy, even for this kind of comedy.

Of course, all (most?) of Will Ferrell's comedies gross tons, but, creatively, there are two categories of Will Ferrell films emerging....the really good ones and the lame ones. So far, I'm lumping ANCHORMAN, TALLADEGA NIGHTS/RICKY BOBBY and OLD SCHOOl among the funny ones, and the list of lame-o's is growing steadily (the nearly unwatchable SEMI-PRO, BLADES OF GLORY, and, despite a terrific trailer, STEPBROTHERS). I didn't see BEWITCHED or whatever his LADYBUGS flick was called...KICKING AND SCREAMING? I wasn't a fan of STRANGER THAN FICTION, but that was more of a lark.

I really dig Will Ferrell and I hope his comedies don't go the way of Adam Sandler's, in which the lame-o's outnumber the great ones (WATERBOY, PUNCH-DRUNK LOVE, then what?), but from the looks of LAND OF THE LOST (and from what the buzz is), he's heading in that direction. Even WALK HARD was a thousand times funnier than BLADES OF GLORY or SEMI-PRO. Career intervention, please!
Posted by Greenblatt the Great! at 11:14 AM