EVERYBODY'S A CRITIC: INDIANA JONES & THE KINGDOM OF THE CRYSTAL SKULL 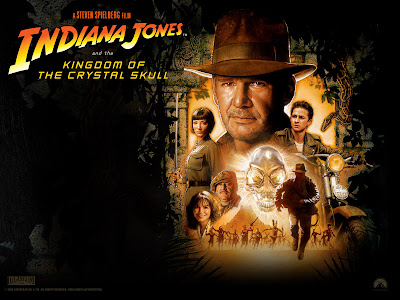 I’m a little late to the party here with my review of INDIANA JONES AND THE KINGDOM OF THE CRYSTAL SKULL, but intentionally so.
Quite frankly, this sequel did not initially seem worth the $14 when it came out (although $786,558,765 worth of box office puts me in the minority). It’s still not worth $14, really, but to my surprise, it’s better than it has a right to be, and it made for an entertaining enough rental….much in the way that I find the BATMAN: BRAVE AND THE BOLD cartoon on Cartoon Network colorful and entertaining, if ultimately nonsensical.
1981’s RAIDERS OF A LOST ARK was a flat-out classic. While 1984’s INDIANA JONES AND THE TEMPLE OF DOOM probably does not hold up very well, I had a grand ol’ time back in the day seeing it on opening night twice at the Chinese Theater in Hollywood by hiding in the bathroom stalls between showings. So there’s some kind of nostalgic thing attached to that one. INDIANA JONES AND THE LAST CRUSADE (1989), with its lame father-son routine and very, very annoying and contrived opening scene, in which young Indiana Jones obtains his whip, hat, scar and testicles all within five minutes (Church Lady to Indy: “How conveeenient!”), is easily my least favorite RAIDERS sequel.
Credit to Spielberg and Lucas: LAST CRUSADE is STILL my least favorite of the Indy movies. And this sequel sure beats all three of the second STAR WARS trilogy for entertainment value. The dubious scenes grow like mushrooms (and mushroom clouds) in this one: such as Indiana Jones surviving an atomic bomb by hiding in a refrigerator (I almost didn’t go forward watching after that dubious trick), Indy and friends surviving three huge waterfall drops in a row (without toppling over or being smashed on rocks) and still managing to hold onto the sacred Crystal Skull (!!), and, most improbable of all, Indiana Jones doing his own stunts without the aid of a stunt double. Despite a high amount of improbabilities, something kept me watching this bullshit sequel. I’m trying to figure out why. 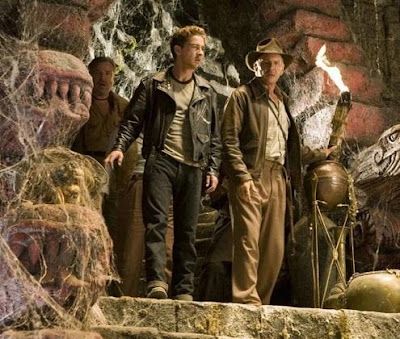 Well, for one thing, I think the Indy/Mutt father-son routine works much better here than the one in LAST CRUSADE (even though I’m still not sure about bringing back Karen Allen into the mix). I overall enjoy Shia LaBeouf (He’s a smart young actor and even if he’s becoming one-note as the beleaguered teen/20-something, he plays that role well) and I thought he had some fun chemistry with that sardonic ol’ grump Harrison Ford. And I think they really tried hard to differentiate this sequel from the previous Indy movies by thinking up clever (if overly comical) new stunts, the 1950s/Atomic Age backdrop, and the whole alien mothership angle, which obviously plays to the sci-fi strengths of both Spielberg and Lucas. It’s true that for all of Spielberg’s post-SCHINDLER’S LIST revelation never to do Nazi villains again in his popcorn movies, these Russian Commies are the same exact villains (the only difference, really, is the uniforms. Even the accent is about the same). And Nazi…I mean, Commie villainess Cate Blanchett dies a horrible death that’s just a thinly disguised twist on the comeuppance the head Nazis receive at the end of RAIDERS. I had read many reviews that ripped apart the twist ending of KINGDOM, but I found the alien stuff refreshing and different for this series. The effects are fun. Let’s not forget these movies are born to be pulpy, as that was the source material (Republic serials). 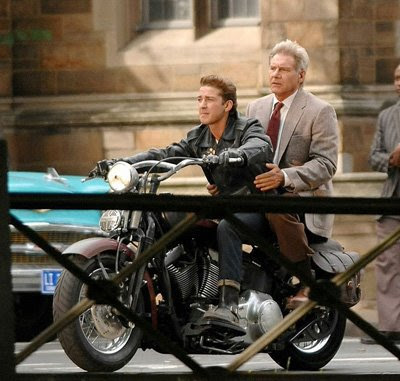 Let’s talk like grown-ups now...KINGDOM’s storyline should not have taken about 20 years between Indy sequels to come up with. (God knows how awful all those rejected scripts must have been if this was the only one Spielberg, Lucas and Ford could agree on). It’s like, what took them so long to cook up this one? Moreover, KINGDOM would’ve been more credible if this were made about 15 years ago when Harrison Ford as action hero was still older but still believable bouncing around. (Maybe they could’ve got Christian Slater or someone to play the Mutt role—ha,ha!).

So a mixed review from me, especially as a full-price feature. As a rental, if you’re in the mood for this kind of movie, a thumbs-up. 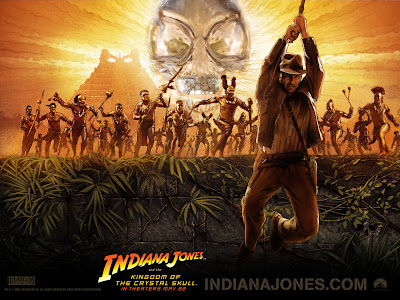 I really love cartoon althought im not a child i think the cartoon are very entertainment. Now a day the animation are wonderful. I always enjoy read about every think, actually once i found costa rica investment opportunities an interesting webside and i wanted to share it with you, like you share with me the wonderful information contained in this blog.