More THOSE UNSTOPPABLE ROGUES in 2010! 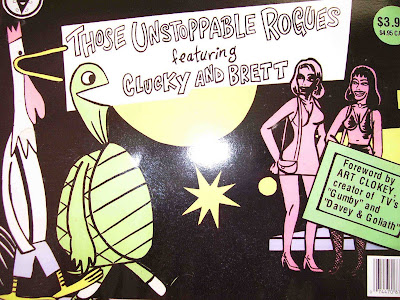 The adventures of CLUCKY & BRETT continue as more of THOSE UNSTOPPABLE ROGUES is on tap for Spring 2010.

It's humor comics at its naughtiest. I can't reveal yet what goes on in the new installment, but let's just say that a few bare bottoms may turn up.

Here's the cover of the original book, which came out in 1995. A new ROGUES story appeared in 2002's version of CARTOON FLOPHOUSE. Both ROGUES books can be ordered at my website.

Viva la Rogues!
Posted by Greenblatt the Great! at 7:31 PM

WooHoo!!! That's quite a scoop you got here Mikey! Betcha Heidi or Tom didn't see this one comin'!! :)

I'll be looking forward to these new adventures with the Rouges. Man, you're becoming as productive as 'Sturdy' Steve Ditko (and what, you're only half his age??!)

Thanks, gentleman Jav. It takes a Rogue to know one. And I hear you've been mighty productive yourself.....

Hey, if 81-year-old "Sturdy" Steve can crank out books on a regular basis, so can we, right?

(But I don't think Fantagraphics got the memo. OOF!)