This week is the birthday of an ol' buddy of mine, Ted Seko! Happy birthday, Ted!

Ted's a really unique individual. By day, he storyboards on the number one cartoon show, SPONGEBOB SQUAREPANTS, over at Nickelodeon. By night and weekends, he's doing his own thing, which couldn't be further from his day work. For years, he's been crafting these interesting, mostly post-apocalyptic parables, forged from his love of Bronze Age Marvel, anime, and old Toho monster movies, among many other sources. A fellow Southern California cartoonist, Ted was once part of the Big Umbrella collective (which I also belonged to for a brief while), during which time he put out the great ATTACK OF THE SUPERMONSTERS one-shot, starring MONSTER MONOLITH and FUSION MAN! He also contributed the longest and most cinematic and epic of my NINE LOVES OF EL GATO comic book, back in 2003. 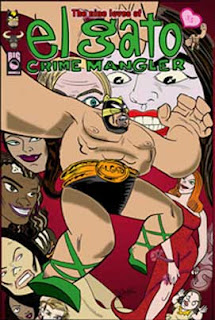 The best place to see samples of Ted's comics and animated cartoons, is his blog: paperengine.blogspot.com. There, you will also find links to Ted's Idiot Engine podcast (where he raps with cartoonists about the craft of making comics) and his Billy Cole webcomic at Webcomics Nation. Finally, as if he's not busy enough, Ted and another former Big Umbrella cartoonist, JAVIER HERNANDEZ, have started their own imprint, XOMIX COMIX. 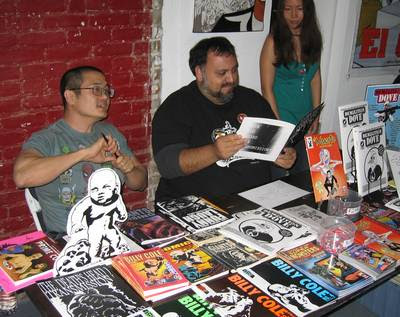 
Oh, yeah, and when you truck on over to see his amazing graphics and fluid storytelling for yourself, wish the fella a happy birthday, his turn comes up this week!

Can you name and discuss three Bronze Age titles and three animated cartoons that fired you up while you were growing up?

Master Of Kung Fu(Moench & Gulacy) really stretched my little kid brain, with the hyper realistic rendered art style of Paul Gulacy and the Pulpy, edgy, scripting of Doug Moench. It wasn't your typical looking or sounding comic back in the day (Of course, that was the truly unique and fantastic thing about the Bronze age of comics, people were able to take more chances and try new things with the manistream medium.

Deathlok(Rich Buckler)This book was great! I was totally into all the post-apocalyptic movies like Soylent Green and Omega Man and Planet of the Apes, and this fit the suit And more! It had a superhero Too! Not to mention fantastic art by Rick Buckler. This was his best work in my opinion. The balance of his Kirby(house style of Marvel at the time) and the cinematic (Sterankoish?) influence made those pages some of my absolute favorite Ever! The coloring was superb, especially on that first appearance issue Astonishing Tales 25. And the story was so great. The main character actually talked to his own computer brain! Classic, original and Truly Bronze Age!

Spiderman(Ross Andru & Gerry Conway) this book was the Classic Marvel Bronze Age comic. The superhero as a real guy that you could totally relate to. It wasn't Superman who was disguised as Mild Mannered Reporter Clark Kent. It was Peter Parker who was disguised as the Spectactular Spiderman.

Gigantor was my favorite cartoon as a kid. I remember sitting crosslegged on the floor in front of the tv mesmerized by the jazzy theme song, the great voice talent that dubbed it(It was originally an Japanese cartoon) and the over the top action it brought to the little screen. I really loved the fact that it was black and white and the airbrushed look the metal would sometimes have.

The DC superheroes shows were great. They would run three 7 min. shorts, an Aquaman then either the Justice League of America, Hawkman, Atom, Green Lantern, Teen Titans, or the Flash, and then another Aquaman ep. I would always get excited because you never knew what hero would be in between the two Aquamans. Great limited animation, great voice talent (Ted knight was without peer) and an amazing fast pace that really deilvered.

Rocket Robinhood is really special for me, because I only had vague memories of the cartoon for a long time. Those memories have always inspired my imagination through the years. I recently got a chance to watch some episodes again (youtube rocks!) and Man, those are really cool cartoons, Ralph Bakshi who worked on that cartoon was really at top form. 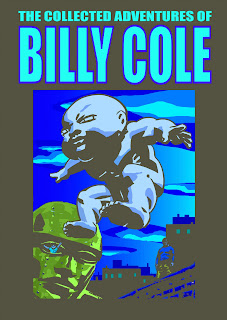 ---- Which overlooked or underrated movie should more people check out and why?

Seconds with Rock Hudson is chillingly good, and suprisingly alot of people I talk with have yet to see it. It's by John Frankenheimer and is like a Twilight Zone (original series) only creepier. 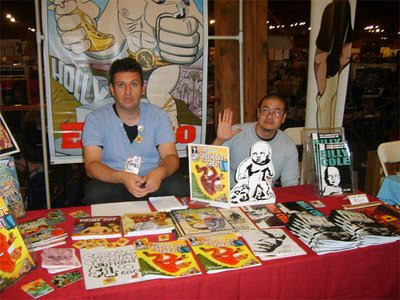 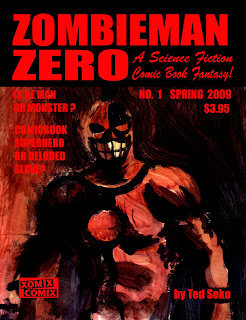 Myself and Ted at March 2008's Super*Market show at Meltdown Comics, Los Angeles.

---- Which of your own comic books would you consider your definitive artistic statement to date and why?

Billy Cole was my first series and had a freshness and honesty to it that I really enjoy still. At the time, I was thinking that this could be my only chance to make a story so I tried really hard to make it count. I've done several other stories since then but never felt that they were my only or last chance to say something.

---- Who would win in a cage fight: Fusion Man or Monster Monolith?

Both. Once they realized they were both good guys they'd join forces and bust out of the cage and Save the World!
Posted by Greenblatt the Great! at 1:28 PM

How scarily talented is Ted Seko? The guy constantly amazes me with how fresh and creative his work is. He truly is on a level of his own....and its a REALLY good level, at that! Glad to see him interviewed.