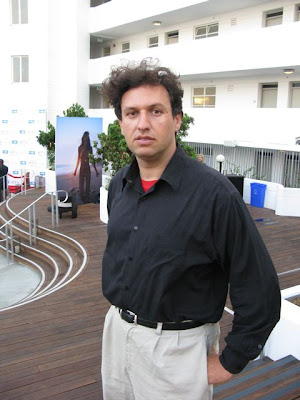 Here I am last Thursday evening at the newly refurbished Shangri-La Hotel on Ocean Avenue in Santa Monica, putting the "super" in male supermodel.

Actually, this photo was taken by BRUCE HULSE on his digital camera, which is a double honor. Bruce Hulse is a rarity in the fashion industry. He was a male supermodel in the '80s, and, faster than you can say "Zoolander," Bruce will beat you to the punchline. He's a stalwart guy, very cool, gracious. We both went to Cornell, but not at the same time. I first met him while interviewing him for this article in connection with his memoir, Bruce Hulse: Sex, Love & Fashion - Memoir of a Male Model

The other half of it, as the images in the print version of the above article attests, is that Bruce is a very talented photographer, having only worked along the greatest photographers in his field, such as Bruce Weber, Herb Ritts, Helmut Newton, you name it. The above was a casual shot on his digital, but he's got a gripping body of work shot in black and white 35 millimeter which I hope finds its way into an art book or a gallery exhibit.

Bruce's memoir chronicles his highs and lows in the 1980s fashion industry as a rarity in his field. You always hear about the female supermodels, but what about the men who share those Versace and Vuitton ads. I know, it's sex discrimination! Oh, well, fashion modeling is a woman's world.

Anyway, me aside, I enjoy the composition of this shot, the way he got the swirl of the stairs on the left. Of course, the Shangri-La is one of the most photogenic hotels you can find. They did a terrific job going art deco on it and I will be writing about it next week.

Enjoy this photo of me, the first of many, as this whole thing has gone to my head and I will be finding an agent and appearing in cologne ads shortly.

Thanks, Bruce!
Posted by Greenblatt the Great! at 6:31 AM