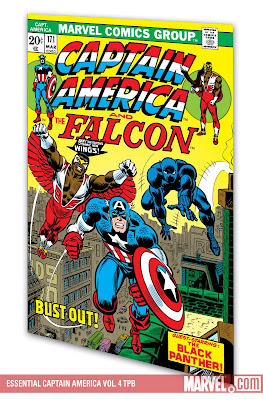 In what continues to be an obnoxious and predictable stunt, Marvel Comics killed off the original CAPTAIN AMERICA a couple of years back......and now the inevitable...he's baaaaack!

"Anything to sell books!" That's Marvel's slogan these days, right?

Here's Captain America as I remembered him. 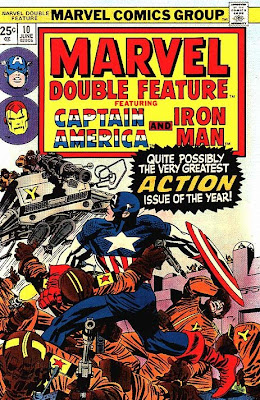 This reprint from 1973 was the first comic book I ever read. My grandparents bought it for me after I picked it up off the spinner rack at Irving's Pizzeria in Canarsie, Brooklyn. Lee/Kirby Cap story, backed up by Lee/Colan Iron Man. Is there a better introduction to the Marvel Universe than this baby? I'll answer that...NO!

It was a bad move to kill him off to begin with (especially with a Captain America movie on the way, so nobody believed he'd stay gone for a minute), but still...it would've taken more balls to keep the character dead. Hey, you don't see T.H.U.N.D.E.R. Agent MENTHOR come back from the grave, do you?

Don't believe the hype...Steve Rogers is NOT back. Captain America has been dead since the late '80s or '90s when guys like STEVE ENGLEHART, JOHN BUSCEMA, SAL BUSCEMA, JOHN ROMITA, FRANK ROBBINS and original artist JACK KIRBY stopped working with the character, and artists such as Rob Liefeld and his understudies got their ham fists on him. 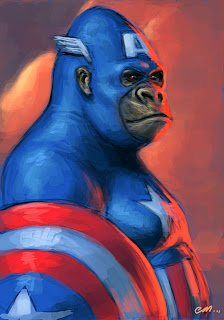 Posted by Greenblatt the Great! at 6:27 AM

I can officially die laughing now Michael!! That last pic is the single greatest sign off ever!!

So, does Colbert have to give back that shield Say-It-Ain't-So-Joe Quesada gave him on national television?

Who ever would have guessed back in the Silver Age that the company would actually regress, not evolve, in the 21st century?

Well, they are very progressive on one note....going green as it were as the House of Recycled Ideas.

I agree with Jav! That last pic/sign off cracked me up!

I'm enjoying the current run of Captain America a lot. I just bought Cap #600 today and have read about half of it so far (it's an extra-thick issue). The art inside is wonderful, for the most part. And the writing shows a lot of respect for Waid. In a way this issue reminds me of Superman #400. See if this issue changes your mind... only $4.99 at your local comics shop.

Oops, I made a typo... "the writing by Brubaker, Stern & Waid shows a lot of respect for Cap" is what I meant to write!

Thanks, Rob, for your update on Cap.

To be fair, I have not read the current Cap stuff, which has been getting rave reviews. I guess I'm exhibiting dinosaur tendencies here, sticking up for the older stuff, but I'm miffed by the cheap stunt itself of killing and bringing him back. I don't think anyone for a minute believed that Steve Rogers would stay dead, so why kill him in the first place (other than grabbing publicity and easy book sales).

That said, I have a high respect for what sayeth Mr. Imes, so I'll check it out when I get the chance.