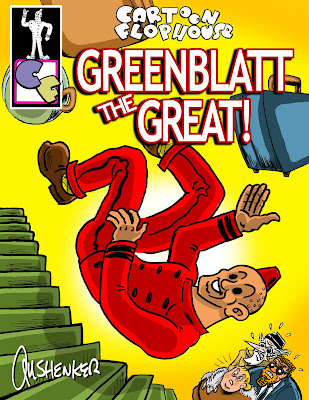 I am thrilled to report that in the new issue of COMICS BUYER'S GUIDE (August 2009) with Power Girl and The Flash on the cover (do I smell a romance?), comic book critic Bernard C. Cormier reviewed CARTOON FLOPHOUSE FEATURING GREENBLATT THE GREAT! # 1. 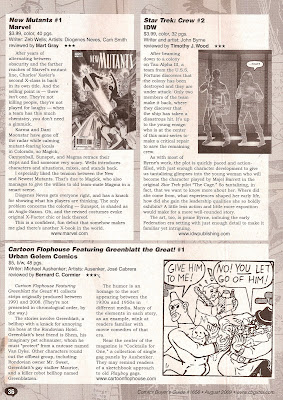 I enjoy CBG a lot because (unlike WIZARD) it gives me a glimpse of everything happening out there -- the big companies, the indie books, some articles on retro books, and even the fanzines. It's informative and fun. TwoMorrows' BACK ISSUE! magazine # 31, to which I contributed (and which many feel was one of the best editions of the mag published) received CBG's pick of the month earlier this year. And that was exciting, too...not only because it was a great review, but for the mere fact that they were paying attention at all.

Even though a cartoonist must not invest too much emotion or credence into a good or a bad review, it feels good to be reviewed, and I thank CBG for giving CARTOON FLOPHOUSE some press. Humor comics deserves as much press as any other genre, and CBG has that territory well covered. I always strive for the ultimate gag strips, or else Cuba Gooding, Jr. hounds me with unwanted phone calls, in which he screams "Show me the funny!" (If I find the guy who gave Cuba Gooding, Jr. my number, I'll strangle him).

CARTOON FLOPHOUSE # 2, by the way, will be out in October, debuting at the Alternative Press Expo (APE) in San Francisco. And here's a preview of the cover: 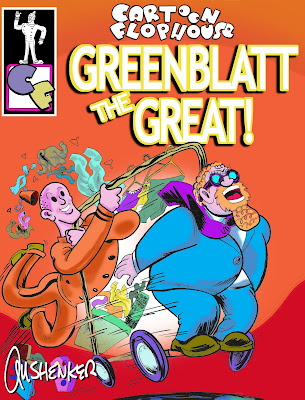 Posted by Greenblatt the Great! at 5:30 PM

Congrats on the write-up, Mikey! You're right about CBG offering a more well-rounded view of what's out there in the comic world. Although WIZARD looks like it may live up to it's name and soon pull off their ultimate trick... and disappear!!

What a treat to see the cover to the new FLOPHOUSE. The hijinx are in full view! Can't wait!

Thanks, Javy! Looking forward to your new book at APE as well. Here comes the Man-Swamp!