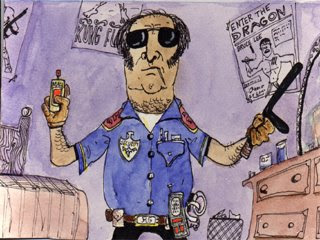 I remember the day I met animator JIM LUJAN. 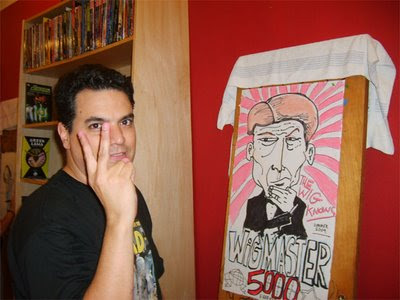 It was last year, around April, at the first annual San Gabriel Valley Comic Book Festival, organized by my buddy, EL MUERTO cartoonist JAVIER HERNANDEZ (who will be interviewed here in the next few weeks).
Jim is a big and handsome guy with a sharp sense of humor and one of the sweetest people working in comics and animation today. I haven’t known Jim for all that long, but he’s one of those people that I becames instant friends with. Like my buddy JOSE CABRERA before him, Jim does funny stuff, and we humor cartoonists have to stick together amid this sea of shopworn superheroes that the comics industry is drowning in.
Jose had known Jim for two years via the Internet before we both met him at the SGV Comic Book Fest. Shortly after, Jim, with Javier and Jose, started a group called Los Cartoonistas, of which I am a proud but regretfully occasional and tangental member of (due to geographical/traffic challenges that only us poor L.A. folk can sincerely relate to).
Jim’s funny and accessible….as are his cartoons: funny, satirical shorts, featuring an array of everyman characters, sending up the trashier elements of American culture. If you dig Mike Judge and likeminded stuff, head over to Jim’s Web site--- www.jimlujan.com ---- and Jim’s YouTube channel: 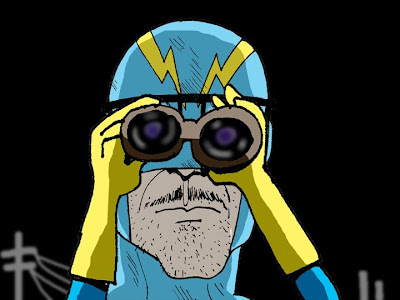 And if you REALLY love his stuff, get on Big Jim’s subscription e-list so you can keep up to speed with his latest work.
Ladies and gentlemen….JIM LUJAN!

---- Which animators/cartoons influenced and inspired you to become a professional animator?

Mike Judge was an influence on me. His really early stuff, even before Beavis and Butthead. I remember seeing "Inbred Jed's Homemade Cartoons" and feeling like Judge and I were on the same wavelength. I think we both come from the same area in our brains in our approach to animation. What eventually led me to becoming an animated filmmaker were regular films though, films like Pulp Fiction and the Big Lebowski. I wanted to create my own world. Animation allows me that, with no budget or actors! I really enjoy creating music for the films to. Music and backgrounds are two of my favorite things about my cartoons. 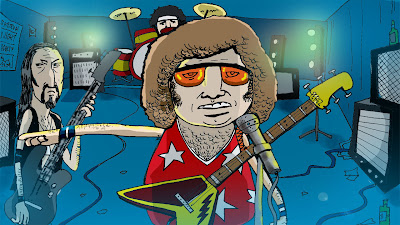 ---- Why did you become a founder of the Cartoonistas and what are the highlights of being a part of this group?

Becoming a co-founder of the Cartoonistas has been a blessing. The goal was to unite local artists and plan public art events together....all with a cartoonist's vibe. In the month of May 2009 we actually became too busy. We had gigs every weekend (and then some). Its nice to see a group of artists expressing themselves publicly for the sheer love of their crafts. Javier Hernandez (co-founder) and I often talk about what the next phase of the Cartoonistas should be. I tend to think "lets open it up to more people, grow it, see what happens". Jav is more realistic "Lets take it slow, keep it between friends". I've met some truly inspiring people through the group (you for example). I take a lot of inspiration from you guys (and gals). When we get together, it makes my own work stronger. 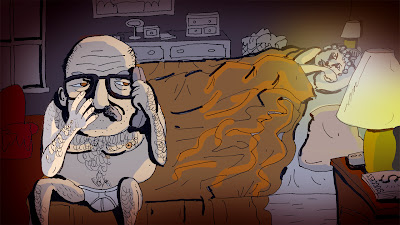 ---- Which loser will Security Man have to take down first--Paul Blart, Mall Cop or the "Observe and Report" guy---and how will he achieve this?

I actually really like Kevin James and Seth Rogan, so I'm going to call a truce. Those guys are both mega-talented. I will say, however, Securityman has been around since 1996 or so, so I'm quite confident that I was a trend setter on this one. Hollywood, whats up? You need to call me next time! Wink wink! If Securityman were to battle those guys, he would do the best action poses, thats for certain! He's all pose and no action. Can you imagine a fully animated Securityman movie? Wow. 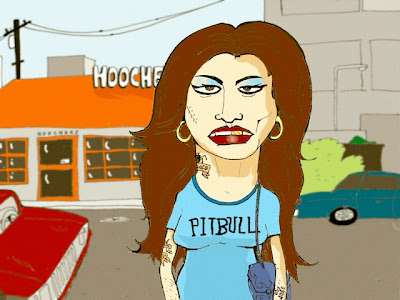 --- Well, the million dollar question: have you ate at the My Dung restaurant in SGV yet and, if so, what can you recommend?

I have yet to eat at the MY DUNG (real name) restaurant in Monterey Park (or Alhambra?). Mark my word, I shall conquer the dung one day....and when I do, you will know. This I pledge. Too bad its not a Hawaiian place, then I could order the poo poo platter. That's classy.
Posted by Greenblatt the Great! at 12:03 PM

Wonderful stuff here! (These guys and their work are refreshingly funny). And what a crapper, I mean, capper, to end off with the culinary question of MY DUNG!

Thanks for interviewing me, Mike. I'm proud to be featured in the Flophouse of love!

That was a great interview. Man now I want my own show to interview you guys. Just you guys!!!

Great, but too short, interview. I've known Jim for years, and am always finding out new things about him.

You're welcome, Jim. Anytime you've got a new project, let me know so I can let the readers of this blog know.

Stan, small world! It took us years here in L.A. to meet Jim and here you've known him all along. You SquidWorks guys have a tentacle in every city! I feel pucker-sunched!