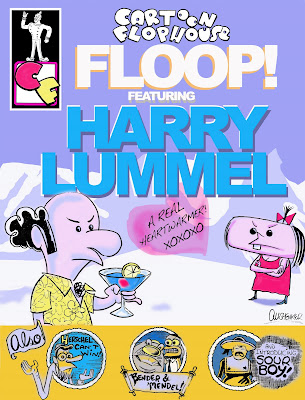 I'm very excited about this leap into the digital domain for CARTOON FLOPHOUSE humor comics.

WOWIO, a leading online distributor of comic books and graphic novels, has become my official digital distributor. In fact, if you go to the WOWIO home page right now, you'll see the cover for FLOOP! FEATURING HARRY LUMMEL being touted as one of their latest books.

The way it works: CARTOON FLOPHOUSE has a homepage within the WOWIO site, from which comic book readers can download my titles for 99 cents a piece. Currently, the titles up at the CARTOON FLOPHOUSE WOWIO HOME PAGE (still being built) include:

(an advance preview, as it hasn't even come out yet in book for, it's slated to debut at APE in San Francisco in October!)

In June, CARTOON FLOPHOUSE FEATURING GREENBLATT THE GREAT! #2 and SILLY GOOSE will be available. So stay toon'd!
Posted by Greenblatt the Great! at 8:57 AM