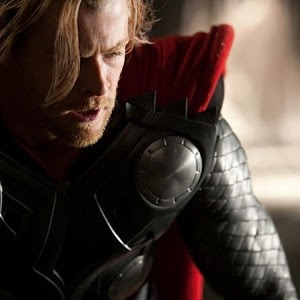 Growing up on '70s Marvel, Goddeth knoweth whyest, I didn't dig The Mighty Thor that much...(could it be the foul faux-Shakespearean language?). So understandably, The Mighty Thor movie is probably the one I'm least looking forward to. With an asterisk.*

*There was at least one issue of THE MIGHTY THOR that I really dug, and here it is: 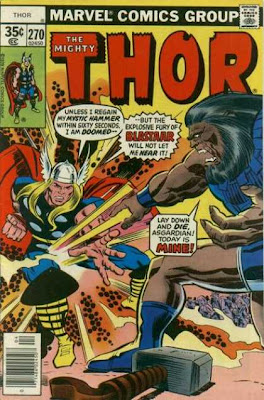 It was just a good ol' fashioned smackdown between Thor and Blastaar. #270 with the dynamic Kirby-esque cover. A classic Bronze Age yarn. And of those cheap mid-60s Marvel Superheroes cartoons, I enjoyed the Thor episodes a lot (and I know the theme song by heart).

Perhaps if I had read more issues such as this one, I'd be more excited about the movie, although the above image of Chris Hemsworth (????) in costume sure looks promising. Although while it's nice when they do a faithful adaptation of the costume, it'd sure be sweeter if they could get that Kirby aesthetic into the film's art direction, which hasn't happened yet with the Marvel flicks and is sorely missing, especially from the FANTASTIC FOUR films.

*Despite my overall lack of expectations, of course, I plan to see the THOR movie opening weekend. It will be the event movie of that summer. And for all I know, it'll be better than IRON MAN 2 and the CAPTAIN AMERICA movie.
Posted by Greenblatt the Great! at 10:23 AM