FANGFACE: More fun than I remembered! 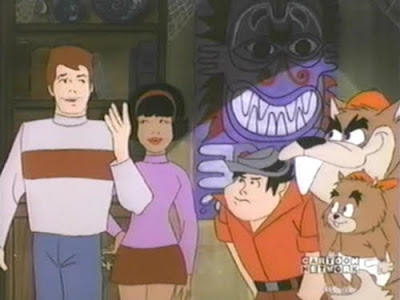 Ah, FANGFACE! How do you solve a problem like Sherman Fangsworth?

This cartoon originally aired for exactly one year from Sept. '78 to Sept. '79. I remember not caring for it, yet another in a long line of Scooby-Doo knock-offs (usually done by Scooby-Doo's Hanna-Barbara, but this time perpetrated by Ruby/Spears). My reaction was, "What, are you kidding me? Another twist on Scooby-Doo???!!!!" We already had Goober, Jabberjaw, the Funky Phantom, that dune buggy thing, and the original Ghostbusters. How many goddamn ghost chasers do we need?

Well, in a turn-around of opinion some 31 years later, I've been catching reruns of FANGFACE on Boomerang and I'm rather enjoying the nonsense. Biff, Kim, Puggsy (with his hat!) and Sherman "Fangs" Fangsworth are an enjoyable bunch. (The only downside is the totally superfluous Scrappy-Doo knock-off, Baby Fangs! (Thanks again, Evanier!) Kim is ethnically vague - she looks like the typical Caucasian chick in these things but with a tan. Biff is the Fred of the show, the jock leader. Puggsy is a Costello-esque sidekick from Brooklyn or Boston or something who should operate as Shaggy, except that the Scooby of the show -- Fangface --- is his own Shaggy! He turns back into Fangs. Whenever Fangface sees a sun--even if it's a design on Kim's pajamas - he turns back into Fangs. The villains are awesome. Like this gargoyle character from a few nights ago.

FANGFACE: Crazy late-night fun!
Posted by Greenblatt the Great! at 10:26 AM