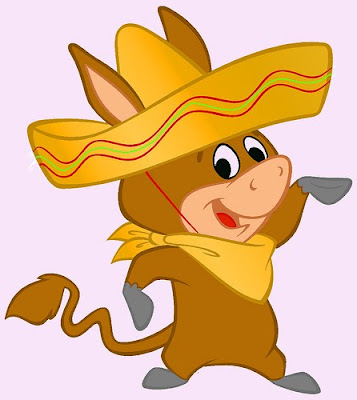 There's a hypocrisy in the race community.

Often, Speedy Gonzales is singled out as a bad stereotype of Mexicans...but nobody is talking about Quick Draw McGraw's sidekick, Baba Louie (above)!

Like Speedy, he wears a big sombrero. He speaks in a lazy English with a thick over-the-top accent. He also works in cartoons (for Hanna-Barbara, not Warner Bros. like Speedy). I'm not defending Speedy, I'm just wondering why Baba Louie is not part of the "Cartoons and Race" discussion. I'm positing a theory that there is a pernicious campaign out there to keep Baba Louie hush-hush!

Is the Hanna-Barbara lobby so powerful that they can out-bribe WB and shove the Baba Louie controversy to the backburner of our watercooler talk? (a mixed metaphor, I know!)

Evidently the H-B influence is very powerful, or else America would notice that all of their cartoons are horrific stereotypes.
Heck, if you're looking for stereotypes, just turn on Boomerang Zoo on Cartoon Network's Boomerang channel. No one peddles more stereotypes than those old Hanna-Barbara cartoons. Is there anyone more gay than Snagglepuss (who does a lousy, rot-gut Groucho Marx impression, by the way)? Huckleberry Hound is from the South and boy is he slow and stupid! What about Atom Ant's arch-nemesis, Professor Von Gimmick, a despicable depiction of an Austrian/German? Or the random crusty old white guys who pop up, like the Major, a big game hunter after Snagglepuss? Or the railroad president Ronald Roundhouse and outlaw Moose Caboose in "Quick Draw McGraw?" The Colonel and Rube in "Yogi Bear?" I've never witnessed a sadder depiction of Caucasians in my 33 years on this planet!

Sigh! When will cartoons ever stop mocking us and show us the serious, grounded-in-reality depictions of society we deserve?!
Posted by Greenblatt the Great! at 8:31 AM

That why they're called cartoons!!!!