DC Puts a "Hex" on Marvel at the Multiplexes 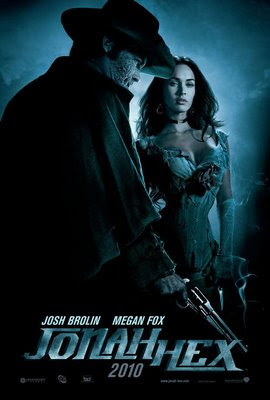 Ever since the IRON MAN 2 trailer was released, I've been kind of underwhelmed by it, and a wave of bad buzz and reviews of the film seems to be confirming that the sequel may not be this series' EMPIRE STRIKES BACK, SUPERMAN II or DARK KNIGHT RETURNS (Oh, well....there's always IRON MAN 3!!!!)

The comic book movie I AM kind of jazzed about is the JONAH HEX flick starring Josh Brolin and Megan Fox. It's at:

Recently, I've been delving into a lot more DC Comics than I used to as a kid, stuff like THE PHANTOM STRANGER with DR. 13, the terrific Dick Ayers/Gerry Talaoc work on THE UNKNOWN SOLDIER, and the Gardner Fox/Mike Sekowsky run of JUSTICE LEAGUE OF AMERICA from the early Sixties (which stemmed from my interest in Sekowsky from the brilliant T.H.U.N.D.E.R. AGENTS for Tower).

Another thing factoring into my interest in the JONAH HEX movie is that I'm acquainted with co-creator Tony DeZuniga--the original artist on the Bronze Age mag--and his lovely wife Tina.

And finally, JONAH HEX has a fun trailer and, despite some bad buzz on THAT movie (they did some reshoots), the HEX flick seems to capture the spirit of Tony's character and the comics. (Not to mention Megan Fox is easier on the eyes than Gwyneth Paltrow or Scarlet Johannson.)

SUPERMAN RETURNS aside, DC Comics seems to be doing quite well with their movie adaptations in recent years. The Batman flicks are superlative, WATCHMEN was not nearly as bad as some people said it was (in fact, it was pretty interesting, and I actually thought the ending improved on the book's version). And I'm actually looking forward to a GREEN LANTERN movie.

Meanwhile, Marvel's movies are kind of cheesing out. SPIDER-MAN 2 and 3 could have been way better, I thought WOLVERINE was abysmal (it made the weak X3 look like a classic), and I skipped ELEKTRA and PUNISHER: WAR JOURNAL. THE INCREDIBLE HULK was great, but the original IRON MAN started out pretty strong and became more mechanical as it went along. Who knows if THE MIGHTY THOR and CAPTAIN AMERICA will be better movies than BATMAN 3, which is due out against THE AVENGERS.

One thing is for sure though: it's fun to see Hollywood turn into the comic book racks of my youth! 'Nuff said, now scat, you zuvembies!
Posted by Greenblatt the Great! at 4:08 PM