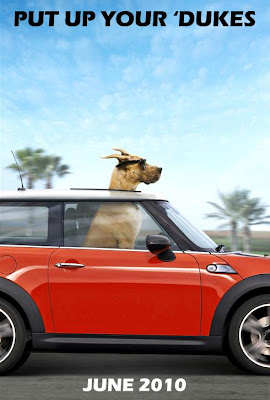 Folks, has the popcorn gone stale?

I know summer is usually popcorn movie season, and I'm not opposed to good popcorn. I look back fondly as recently as Summer 2008, when IRON MAN, THE INCREDIBLE HULK and THE DARK KNIGHT RETURNS came out within a few weeks of each other.

But I think there's something wrong when the MARMADUKE movie trailer actually looks more interesting than everything else coming out this summer. And if you don't believe me, have you seen the clips for SHREK 4? TOY STORY 3? the A-TEAM movie (and other '80s rehashes like KARATE KID)? MACGRUBER (which is not even a legit '80s remake but a parody of an obscure '80s show)? I have to admit that based on the trailer, I'm underwhelmed with IRON MAN 2 (although I do intend to see it opening weekend....which is all the studios really care about...) and the bad buzz building for it doesn't give me much hope that this will be a very good sequel. I'm a little more into the trailer for JONAH HEX because at least it's something new and recently I've been on a DC Comics kick, reading-wise.

If you're a TWILIGHT fan, you've got something to look forward to, but I never made it past the first hour of the first movie. It just seems like HARRY POTTER for a slightly older crowd (age 15?). If you're a fan of Adam Sandler and Will Ferrell, it seems like diminishing returns with their new ones.

As usual, the left turns will probably be the best movies to surface. Either some indie films I haven't heard about yet. Or perhaps that Christopher Nolan movie that I don't know much about. But it sure as hell won't be that "spy comedy" NIGHT AND DAY starring Tom Cruise and Cameron Diaz. Good grief!
Posted by Greenblatt the Great! at 8:27 AM