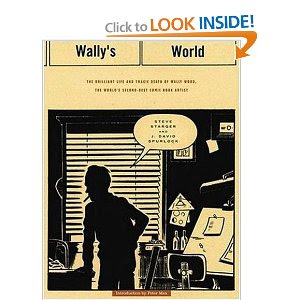 Currently reading "Wally's World: The Brilliant Life and Tragic Death of Wally Wood, the World's Second Best Comic Book Artist" by Steve Starger and J. David Spurlock. I'm enjoying learning about the THUNDER AGENTS artist, even if this biography doesn't move very fast. The pacing is kind of sluggish and there's some padding going on. But overall, it's an interesting read about an interesting bloke, who somehow wound up in the Valley, where he killed himself (I guess North Hollywood sometimes has that effect on a person...)

Below is what I wrote as a quickie review listing on the book's Amazon page, which sums up my feelings on it:

As a longtime comic book reader, I very much appreciated "Wally's World: The Brilliant Life and Tragic Death of Wally Wood, the World's Second Best Comic Book Artist." It's an interesting biography about a cartoonist whose work has mesmerized many but whose life many do not know much about. A disturbing image materializes as the book goes along that amounts to a sad end for one of the most accomplished and versatile comic book cartoonists to ever pick up the brush and ink bottle. The book is not without some flaws. Several detours, such as the chapter on the back story on Wood's Finnish heritage, overreach. There are also gratuitous misspellings, typos and grammatical errors (evidently, the writers do not socialize with editors much). Frankly, this bio will probably not appeal much to those outside of comics fandom circles. However, for fans of Wood's "T.H.U.N.D.E.R. Agents" and "Daredevil," "Wally's World" is a must-read.
Posted by Greenblatt the Great! at 3:43 PM

This is my Good luck that I found your post which is according to my search and topic, I think you are a great blogger, thanks for helping me outta my problem..
Dissertation Writing Service