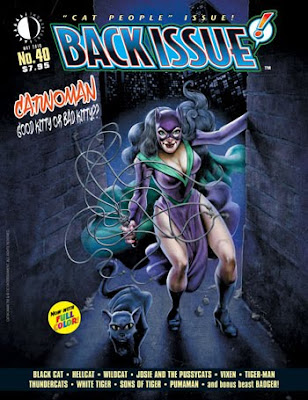 BACK ISSUE is back, baby!

In this issue, which sports a pretty whopping cat fetish, I've contributed two pieces, both on comics from the notorious anti-Marvel company, Atlas/Seaboard.

Atlas/Seaboard lasted all of 1975 in its over-the-top attempt to nuke Marvel by flooding the newsstands with inferior, Marvel-inspired product. However, their page rates were so much higher, during their flash-in-the-pan existence, they were able to poach top talent from Marvel and DC, including writer Gerry Conway and artist/legend Steve Ditko, both of whom worked on TIGER-MAN. In addition to my piece on TIGER-MAN, I've got a sidebar on the feline-in-name-only Atlas book THE COUGAR, which whole-hog anticipates Mark Evanier's CROSSFIRE in concept (oops!).

I'm personally looking forward to reading this one, personally hoping to learn more about one of my all-time favorite second-stringer characters, THE WHITE TIGER (a.k.a. Hector Ayala).

Check out the deets on this issue right here!
Posted by Greenblatt the Great! at 8:54 AM