History is About to Repeat Itself: Highly Anticipated State-of-the-Art Marvel Superhero Sequel vs...Medieval Man With Sword and Steed 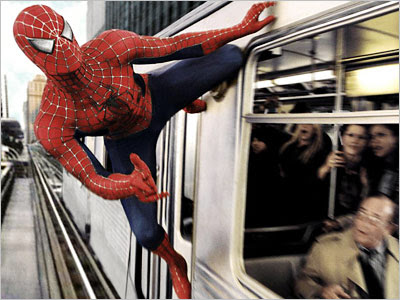 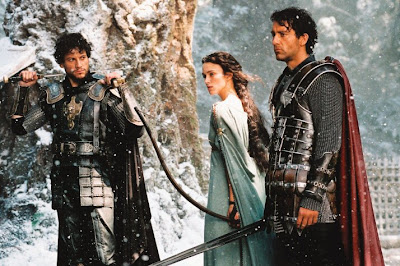 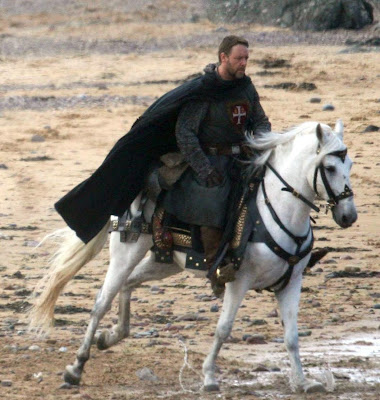 Six years ago, my buddy RICH CARRADINE and I spent the first part of 2004 shaking our heads, wondering, "What was Disney thinking?" Disney was releasing one bomb after another (HIDALGO, HOME ON THE RANGE) and they were trying to get people fired up about their big summer "blockbuster," KING ARTHUR (starring the supernatural box office draw Keira Knightley). Guess which week they chose to release KING ARTHUR? Why, at the very same time Sony released SPIDER-MAN 2 -- only the sequel to the biggest opener (and one of the highest-grossing films) of all time.

It begged the question: if you're a tween and you only have $15 allowance that week, which movie are you going to see? The biggest sequel of your lifetime with the coolest superhero in comics? Or some ancient legend with men on horses? Needless to say, Disney took a bath, a shower and a moist towelette on KING ARTHUR.

Well, you'd think the movie studios would employ some common sense and learn from history....but (cue DMX) here we go again! Start praying for Universal Studios. Universal is already suffering from financial woes...and things are about to get woeier!

Last year, Universal's only hit was a surprise (FASTER & FURIOUSER) and film after film they released crashed. Now, hot on the heels of IRON MAN 2, which will open May 7, Universal will release---you guessed it!---Ridley Scott's ROBIN HOOD, (Starring Russell Crowe!!! And Cate Blanchett!!) on May 14!

"OH, BOY! REALLY? You mean, instead of seeing superheroes shooting repulsor rays and robots destroying a city and stuff, I get to see a guy shoot bow and arrows at an army of men on horses? Mommy, take me to see ROBIN HOOD now!!!! Pretty pleeeease!"

I'm not making an aesthetic judgment here. I'm not saying that ROBIN HOOD is going to be a bad movie. I'm sure Ridley Scott has come up with a sensitive portrayal of this hoary old story that will make ROBIN HOOD the AMERICAN GANGSTER of folk tales. I'm just questioning whether this is the kind of material you really want to pit against IRON MAN 2, which is most likely to be the highest grossing film of the year. One thing is for certain: the executive who greenlit ROBIN HOOD should start floating out his resume and packing up his cubicle...he/she has some professional June Gloom in the forecast.

IRON MAN 2, I'll see you in the theaters on opening weekend! And ROBIN HOOD, buddy, I'll catch up with ya on DVD in August!
Posted by Greenblatt the Great! at 6:33 AM

"woeier" is my new fave word.

I imagine this version of ROBIN HOOD will open strong in my homeland. After all, it isn't every day that you get to see both an Aussie ROBIN HOODand and Aussie MAID MARIAN.