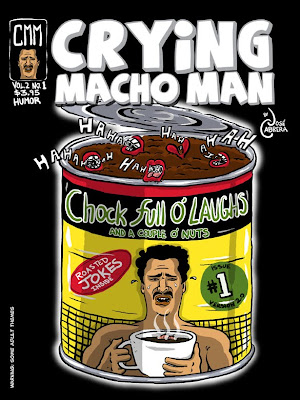 CRYING MACHO MAN #1 by the always-funny JOSE CABRERA is out...and it's hysterical. You can order it here.

It's chock full of assorted nuts in bad marriages and crazy affairs including.....Frida Kahlo and Diego Rivera?? Yes, folks, CMM is back, this time in magazine form. I just read #1 of four promised magazines for 2010, when all of the recent weekly CMM webcomics will be collected.

Hep Flophousers know that, over the last few years, the funniest comics out there WITHOUT a CARTOON FLOHPOUSE label on it was CRYING MACHO MAN comics. Well, now that's no longer true....because Michael Aushenker and Jose Cabrera have joined forces as co-publishers of the new CARTOON FLOPHOUSE comics company. Or, as the kids call it, "CF v.2!"

Here is a quickie preview of covers of just some of the upcoming CRYING MACHO MAN mags, as well as assorted GREENBLATT THE GREAT! comics. 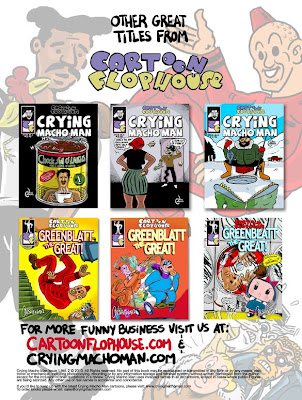 *So what does this mean for DISTRIBUTORS AND RETAILERS?

CARTOON FLOPHOUSE is a full-fledged humor comics machine with a new comic book magazine coming out roughly every two months!

*So what does this mean for fans of the old CRYING MACHO MAN enterprise?

Nothing, sport. All of the CMM collections, as well as the official CMM blog and contact will still be over here, however, a NEW CARTOON FLOPHOUSE WEBSITE to reflect the new partnership and with regular announcements of new CARTOON FLOPHOUSE COMICS will be up by summer.

*So what does that mean for FANS OF FUNNY COMICS?

Twice the amount of hilarity all year long: both in output of books and at comic book convention and in-store appearances where a certain lovable bald guy and a particular wavy-haired joe will be on-hand to dish nonsense to knuckleheads and back!

In addition to four gag-packed issues of CRYING MACHO MAN magazine from Messr. Cabrera, Senor Aushenker currently has brand new GREENBLATT THE GREAT! and UNSTOPPABLE ROGUES on the way, as well as a PROFESSOR PAP mag and all-new SILLY GOOSE--------

-----not to mention the first CARTOON FLOPHOUSE trade paperback, which character is being kept under lock and key for now but should rear its ugly head by year's end.

So there's a lot of excitement....and that's not just because Cabrera and Aushenker now have more excuses to grab coffee together! (Caffeine will do that to you, kids). Plans are underway for an official company debut (sort of like our debutante party) at APE (ALTERNATIVE PRESS EXPO) 2010 in San Francisco....which is only fitting because that's the convention where Cabrera and Aushenker met in 2007!

If you're like Greenie, raise a martini glass full of Schplotz ketchup and drink a toast in honor of the new CARTOON FLOPHOUSE!

Posted by Greenblatt the Great! at 6:57 AM

Yay for the mega comics producing machina that is Cartoon Flophouse. Crying Macho Man is funny too. picked one up a couple years ago when you guys wuz exhibitin'. Deano.