News to me: ONE DAY AT A TIME star was son of cartoonist Henry Scarpelli 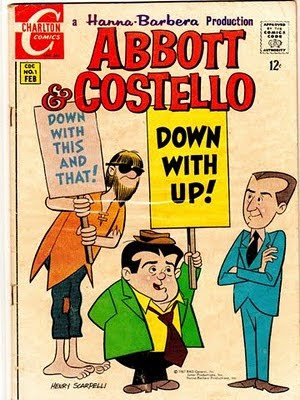 I was reading this article about ARCHIE COMICS introducing a gay character to its cast, and as it turns out, longtime Archie artist HENRY SCARPELLI, who died on April 4, was the father of GLENN SCARPELLI, the kid from ONE DAY AT A TIME. Remember this guy? Here's an excerpt from that article:

One person with a personal interest in Archie's new friend is actor Glenn Scarpelli, who is best known for his long-running role as Alex Handris on the hit television situation comedy "One Day at a Time."

Besides being gay and happily married to partner Jude Belenger, Scarpelli is the son of Henry Scarpelli, who worked for Archie Comics for 40 years, including some strips featuring his famous son, before his death on April 4.

"I think it's awesome. I actually think Archie should have married Jughead in the first place," he laughed. Of Kevin 's debut, he said, "My dad would have liked it, too."


AIN'T THAT WILD?
Posted by Greenblatt the Great! at 2:58 PM