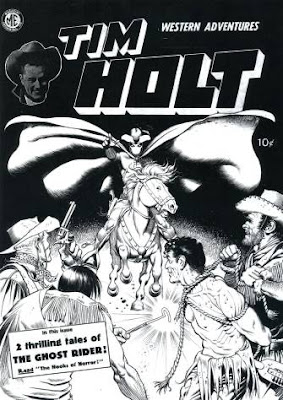 Like some of you fellers, I grew up reading ye ol' flaming skull on the motorcycle Ghost Rider, but before that incarnation, there was the original, lovingly rendered by the great Frank Frazetta, who did a few of the Western GR's covers back in the day.

Well, pard'ners, TwoMorrows just announced BACK ISSUE magazine's "Wild West" issue, # 42, which will come out in three months, and the article I'll be contributing to that issue will be about the original Ghost Rider, which was re-named Night Rider by Marvel when the character was revived in the 1970s (so as not to compete with the motorcycle demon GR...convoluted, huh?)

The Jonah Hex cover on BACK ISSUE #42 is by my buddy TONY DeZUNIGA (Jonah Hex's original artist/co-creator), who is featured in the issue. Yippy-yo!
Posted by Greenblatt the Great! at 3:32 PM

Mikey, I saw a link this morning on THE COMICS REPORTER to some of these Frazetta GR covers. Geez are they stunningly beautiful!! Such a great character. Looking forward to your article. I have the 70s reprints of Marvel's 1960s Ghost Rider comics. A timeless hero, that spectral horseman!