Be careful whose work you diss! It may come back to haunt you!

Many were the hours when my BACK ISSUE buddy JERRY BOYD and I would discuss the merits of the cult Tower Comics series T.H.U.N.D.E.R. AGENTS. And many more were the hours that we'd get a hearty laugh out of the Lightning feature, which was A BIG SKIP in our book! Gee whiz! Only the Manny Stallman art on Raven was worse!

I mean, look at this douche! Is he not the biggest swipe of The Flash and The Whizzer that you've ever seen? And the Sekowsky art was kind of corny.

Well, there's bad corny and there's good corny, and now I've put Mike Sekowksy in the good corny slot thanks to his work with writer Gardner Fox on the Justice League of America stories dubbed CRISIS ON MULTIPLE EARTHS. 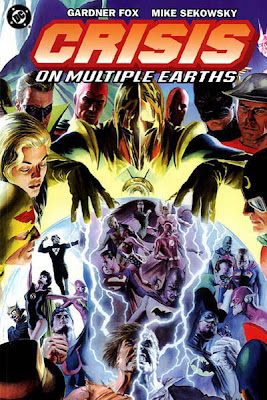 This reprint collection (Alex Ross cover above) is brimming with Earth-1, Earth-2, Earth-3 and Earth-A switcheroo nonsense that has to be read to be believed. Fox's writing applies a T.H.U.N.D.E.R. AGENTS-type tone to the JLA proceedings (even though it preceded the beloved T-Agents by four or five years). I won't get too deep into it other than to say that it's highly recommended....AND I LOVE THE MIKE SEKOWSKY ART! It's at once simple and dum-dum old school but it's also sophisticated... kind of like Don Heck art. In my book, Mike has now crossed over to join the ranks of the great naif artists in comics, such as DICK AYERS (UNKNOWN SOLDIER, COMBAT KELLY & THE DEADLY DOZENS) and DON PERLIN (WEREWOLF BY NIGHT, GHOST RIDER). Unifying all of these artists: an uncluttered, not at all flashy art style which greatest strength is storytelling flow and compositions. I rather have great storytelling with simple art over great art with lousy movement any day, wouldn't you? 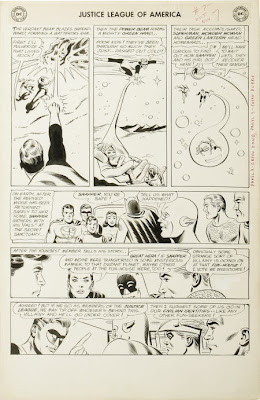 Characters such as Dr. Fate and Green Lantern and the Atom come off as kind of cool in the series, and it's neat to see all the counterparts, such as the supervillain version of the JLA. One of my famous quotes goes like this: "Life makes hypocrites of all of us!"

Little is known about the artist Mike Sekowsky, a Jewish-American who came from Pennsylvania to Los Angeles to embark on a career of drawing cartoonists. He worked in animation at Hanna-Barbara shortly before his death in 1989. 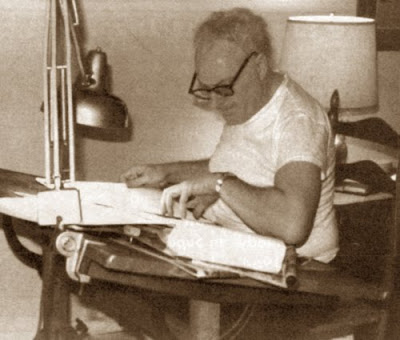 Here is the proof that I am not the only cartoonist who gets his pages done with hot models in the room while I await my espionage assignment to go up against the evil bald forces of S.C.A.L.P. JUST A JOKE (but evidently NOT A JOKE for Mike Sekowsky....see below...) (Hmmmm.....maybe I should look into some of that other Manny Stallman art....)
Posted by Greenblatt the Great! at 8:28 AM

Mike Sekowsky was NOT Jewish.