Role Models in Journalism: Rex Graine at the Daily Crusader

My career has long been bifurcated by journalism and comic books, and here is inspiration derived from both of those worlds: As created by Steve Ditko in 1967, Rex Graine of the Daily Crusader, who has a penchant for putting on an emotion-free mask and turning into Mr. A, a judgmental vigilante who must decide on the spot who is good and who is evil. Inevitably, street punks, racketeers, and corrupt assistant D.A.'s get there comeuppance (usually with Mr. A's darling little business card as a consolation prize). 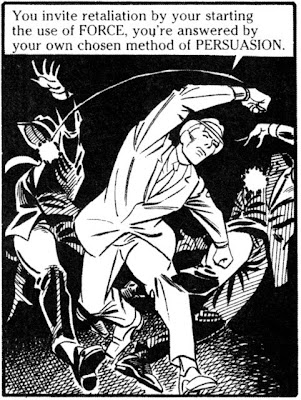 Graine writes a column for his newspaper in which he causes trouble by standing up for basic principles, and instead of attracting admiration, he garners loathing and suspicion. Even his publisher, Henry Rath, thinks Graine is a real pain in the posterior, but he can't get rid of him (or even edit his columns) even if he wanted to. As Rath bitches: "I'd fire that arrogant, uncompromising Graine if I could! He was my brother's pet when my brother was publisher. And his condition for me taking over the paper after he died was that Graine was free to print his column his way! If I interfere or kick Graine out, I'll lose the paper! My *#@$ brother!"

Well, thanks to a glitch in some old fool's will, Rex Graine and his damning column at the Crusader are here to stay and bother the hell out of the Lew Baggots of the world. Little does that Crusader newspaper know that they're bankrolling the operations of a vigilante in a suit and a Halloween mask, but the streets sure are quieter at night and often there is not enough crime to report on page one. 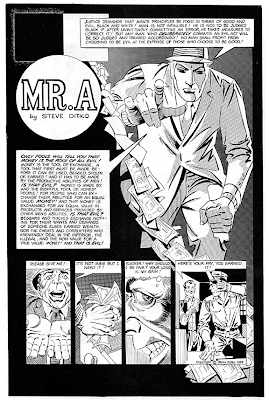 Rex Graine, we salute you for sticking by your guns and not bending to corrupt politicians and society's ills.

In related news, for the sheer love of the game, here's a compelling Ditko cover featuring a self-created knock-off of his Mr. A character (and the inspiration for a certain Watchman): The Question! 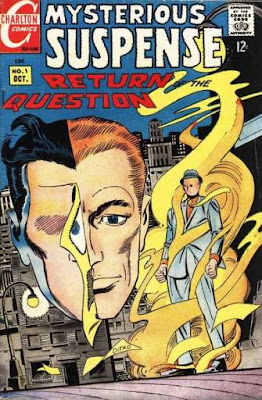 Posted by Greenblatt the Great! at 6:38 AM

I agree 23 zillion percent. From the dual passions of comic books and journalism onto Ditko's Objectivistic hero Rex being a prime source of personal inspiration and influence.

It's interesting (and not coincidental?) that the alter egos of Ditko's vigilante heroes are in some type of truth-seeking profession....often journalism of some type or another. Jack Ryder (the Creeper) was a TV reporter.

And following Stephen Strange's career-ending drunk-driving accident, he was forced into a quest for truth.
There is that duality in all of his characters, where circumstances force if not an altogether 180 in life direction, then at least a forced stripping down to basics of their own psyches. Really, I'd call Ditko the modern day answer to Aesop.

That's a good way of putting it, Nilskidoo (or can I call you Doo for short?)

Nils, I think your astute Aesop comparison comes from the fact that, unlike most comic book writers, who kind of write for the market and tap into some common, generic ideas of good/bad, right/wrong, etc. (like TV writers), the power of Ditko's writing and concepts come from the fact that he has such a specific value system that is the underpinning of his stories and the characters he creates.

He has figured out for himself what is good, what is bad, and why the gray areas should not exist (that last part being opposite of what most entertainment explores.....it seems that since the 1970s, serious moviemakers have been obsessed with the gray areas).

The flip side of this paradigm is that Ditko can be repetitive, often returning to similar themes and concepts. Mr. A, The Question, the Outline, the Mocker, The Creeper--all cut from the same cloth.

But, oh, what wonderful cloth it is! There's enough variation between his creations to make things interesting.

And, of course, his creations are pretty unique and independent of other creators' concepts of "superheroes." But that's why he's the one and only mighty Steve Ditko!