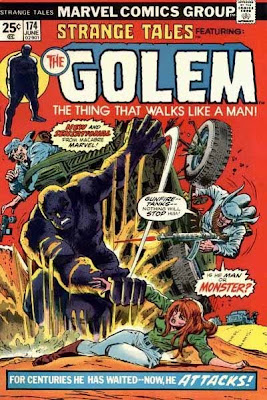 After creating so many comic book panels, it felt good to be in one for a change!

Let me set the stage. Twenty-one days ago, I was in the city of San Francisco, California, on the cusp of a blow-out birthday weekend that included a fellow cartoonist's art show, trips to the Mission, Mitchell's and Marin County, and, uh, Wonder Con nonsense. But the reason I went up to the Bay Area in the first place is because I was invited to speak on a panel called "People of the [Comic] Book" at the Contemporary Jewish Museum (which is kind of like San Francisco's answer to the Skirball Cultural Center). The panel was billed as such:

"Join artists Miriam Libicki (jobnik!) and Michael Aushenker (Cartoon Flophouse), as well as scholars Craig Kleinman, Joel Schechter, Lou Schubert, and Rabbi Harry Manhoff, for a roundtable discussion about the connection between Jews and comics, both past and present."

(By the way, I hope I was invited to help represent the 'present,' not the 'past!')

I had met the moderator, Dr. Lou Schubert, at last year's APE Convention, where he bought a bunch of my books and extended the invitation to take part. He also appreciated my extensive article on The Golem in comic books (particularly Marvel's STRANGE TALES Golem) for BACK ISSUE # 36. Dr. Schubert is a delight and I'm grateful that he invited me to participate in two versions of this panel. Here is the video from that April 1, 2010 panel, in a program that featured a few authors and eggheads, another cartoonist, and myself.

I'm not sure whether the discussion will settle anything (although it is unfortunate that they ran out of film right before I presented my solution on how to save the comic book industry and my formula on how to cure dandruff----I had been working on both!)

I think the people on the panel were just getting warmed up by the time this thing came to a close, but at least we covered way more ground in our discussion than the reprise of this panel which took place on Sunday, April 4, at 12:30 p.m. (pictures to come in a future posting on Part 3 of Wonder Con Weekend). Man, as soon as we finished our introductions, it was time for the next panel. Golem, Golem, gone! Such is the wonder of Wonder Con!
Posted by Greenblatt the Great! at 6:40 AM