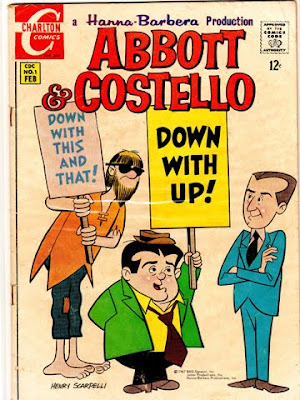 Every now and then, I come across a pleasing-to-the-eye funnybook cover that dazzles me with its effective simplicity, color choices and minimalism aesthetic. Here comes one now, from the late HENRY SCARPELLI, whose death was just announced yesterday. Henry, not only did you inadvertently capture the sentiment of the nation on this vintage comic from four decades ago, you sure knew how to rock the Abbott & Costello in a way not seen since those animated mice in the WB cartoon.

And "I'm a baaaa-aa-aa-aad boy" for posting this now. Thanks, Hank!
Posted by Greenblatt the Great! at 7:10 AM

I had been hoping to get an original commission of 'Binky's Buddies' from Mr. Scarpelli....but not now. Wow, another of the good ones is gone.
Thanks for the news, Mike.