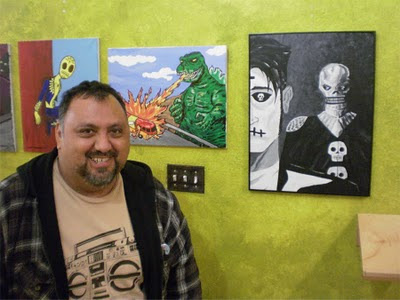 Here's Part II of my post on WONDER CON! which goes into my convention highlights (except for the two panels I appeared on at the Contemporary Jewish Museum on Thurs., April 1 and Sunday, April 4 at Wonder Con, and my run-in with UNKNOWN SOLDIER creator JOE KUBERT, to come in Part III.

Actually, I thought that Javy did a rather excellent job with his Part I, which I have made my Part II until I have the time to post a Part III. So my Part II will now become my Part III, but in the meanwhile, read Javy's Part I, which is my de facto Part II. Capiche?

Part I of my WONDER CON 2010 highlights is right here.

I'll add to Javier's post to say that his art show, on Sat., April 3 (my birthday) was a ball of fun. The Padilla family, notably curator Ricardo "Rico" Padilla and Rosa Linda, who provided homemade sangria and guacamole dip, threw Javier one hell of an art show. Also there was their charming daughter, Sophia, who is 13 going on 30 (a brilliant student wise beyond her years). And their friend Rosario.(The photos are stuck in my camera, so I'll have to run them at a later point). 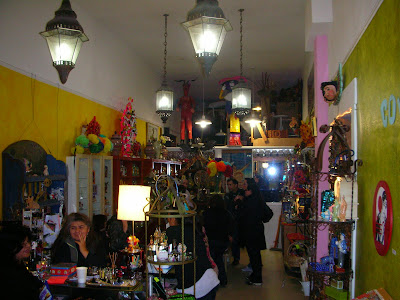 It was great to see some new paintings from Javier Hernandez as well as my personal favorite, the black-and-white El Muerto/Mictlantecuhtli painting (see above) from 5 years ago (glad he never sold it, it's probably my favorite Hernandez piece ever!). 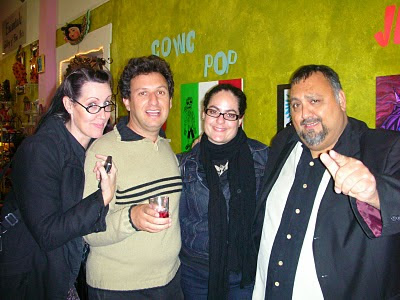 My buddy Geoff and I arrived after Wonder Con to find Javy outside of the gallery, chatting with a woman I met at the show earlier that day, the charming Azuza-based letterer Kathryn Renta, who, through a mutual friend, was hep to the art show. When I arrived, everyone broke into a round of "Happy Birthday" and, later in the evening, they repeated a round of the birthday song again for me. Then I learned that Kathryn's friend, Alissa's, birthday was the next day, April 4, and we all broke into yet another birthday chorus. Geoff, who is smarter than the average gringo, accurately deciphered the key ingredient in Rico's sangria: cinnamon! Javier's show was Ricardo's first show as a curator, and he did a fantastic job of rounding up a cool clutch of people to celebrate Jav's latest displays of artistry. It was refreshing to be around some people who were artistic but not artistic/autistic (most Wonder Con attendees and participants).

After what was a fun festive evening at the gallery, Jav and his host, the Padilla, went on a trek to SF's best pizza, Toto's, which was in the wrong direction for Geoff and myself, so we joined my buddies, COLONIA cartoonist Jeff Nicholson and his wife Roxy for some great Mexican grub at the Poncho Villa tacqueria. Yum-O!

OK, Part III (formerly Part II) -- the final installment of my WONDER CON 2010 HIGHLIGHTS, featuring the two panels I appeared on, an AWOL Joe Kubert, trips to Nation's and Mitchell's ice cream, a night of mirth and "Celebrity Apprentice" antics with the Padillas in Mira Loma, our exit-door grand-slam breakfast at Ahn's Burgers in Oakland, and my Baby Rocketeer anecdote from the floor of Wonder Con, to come. You won't want to miss Part III, which is full of surprise twists......So keep checking in.....
Posted by Greenblatt the Great! at 7:28 PM